1. Nero/Pseudo by WSC Avant Bard at the Shop at Fort Fringe.

” …this rocking musical is an intense experience, one sure to leave you tapping your foot and wondering what your legacy on this earth will be.” – Anna Brinley.

Synopsis: Rome has burned down and Nero is toast. Then a stranger shows up. Looks like Nero, sounds like Nero—and when he rocks out, the emperor’s fans go berserk. A WSC Avant Bard world premiere Nero/Pseudo is a hot mash-up of ancient history, glam rock, and the politics of celebrity. 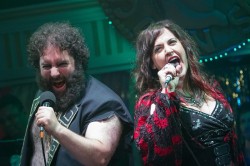 “Pumpkin Theatre’s production of ‘Peter Pan and Wendy’ has no problem capturing the excitement, charm and magic of the original story.” – April Forrer.

Synopsis: Wendy Darling is a girl on the verge of becoming a young lady and like Peter Pan is having trouble growing up; wishing to stay a child forever. Smee, Captain Hook and of course Tinker Bell join this musical cast in a new telling of this famous tale of adventures in Neverland. 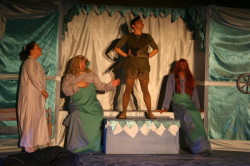 3. Into the Woods at NextStop Theatre Company.

“As NextStop Theatre Company wraps up its first professional season after transitioning from the Elden Street Players, it’s nice to know they can handle an iconic musical such as Into the Woods with such a strong production.” – Jeffrey Lee Walker.

Synopsis: Into the Woods combines the iconic stories of Little Red Ridinghood, Cinderella, Rapunzel and Jack (the giant killer), with the new tale of a childless baker and his wife.  Their intertwining quests into the woods result in a twistedly funny, but sobering musical about the cost and consequences of “happily ever after.”  The original Broadway production garnered three Tony Awards and a Grammy, and inspired an upcoming Hollywood movie starring Meryl Streep, Johnny Depp, and Anna Kendrick. 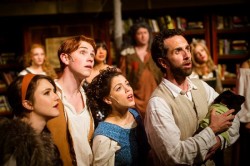 4. Three Men In a Boat (to say nothing of the dog) at Synetic Theater.

“Three Men in a Boat (to say nothing of the dog) takes us on a deliciously amusing voyage filled with surprises along the way that inspire and emphasize the growth of camaraderie and team spirit.” – Tina Ghandchilar.

Synopsis: Still fresh and witty after more than a century, Jerome K. Jerome’s delightful travelogue tells the story of three young men suffering from a severe case of “overwork”. Accompanied by their dutiful terrier Montmorency, they take a boating holiday through the country, getting into one satirically hilarious predicament after another along the way. Adapted from a novel consistently ranked as one of the funniest of all time, this production will be directed by a renowned area director Derek Goldman and choreographed by Synetic’s Irina Tsikurishvili. This production runs one hour and forty minutes with no intermission. 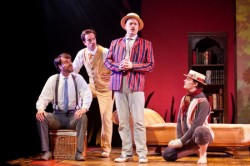 Synopsis: Broadway audiences adore him for his performances in City of Angels, Guys & Dolls, Chicago, Annie Get Your Gun, 42nd Street, Glengarry Glen Ross, A Catered Affair, and Sondheim on Sondheim, among others, but television audiences the world over remember him as Luke Duke from The Dukes of Hazzard! Now, for one very special performance, Rams Head On Stage is thrilled to welcome two-time Tony nominee Tom Wopat to our stage. His distinctive vocals can be heard in venues throughout the country and on an array of CD’s, crooning the tunes of Harold Arlen, Hoagy Carmichael, and Cole Porter, among others. 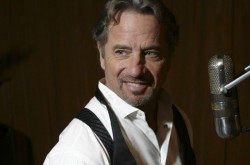