‘A Quick 5’ with William Yanesh 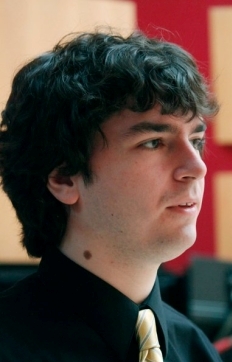 William Yanesh can currently be seen and heard playing the piano at Round House Theatre as the musical director for Ordinary Days.  Some recent area credits as either musical director/orchestrator or composer include The Last Five Years at Signature Theatre (Helen Hayes Nomination for Outstanding Musical Direction,) Winnie-the Pooh, Goodnight Moon, Miss Nelson is Missing and The Cat in the Hat for Adventure Theatre MTC, A Grand Night for Singing at the Washington Savoyards, The Ballad of the Red Knight at Port City Playhouse, Medieval Story Land at Capital Fringe and Spring Awakening at UMD. William’s career has exploded in just a few short years. I first saw him at the Washington Savoyards production of  A Grand Night for Singing  and next thing I know he is all over town working at some of our best theatres. It’s so nice to see a young talent getting noticed and William Yanesh, as you will read, he has plenty coming up for himself. His musicianship is always great and is always a treat to listen to.

Where did you get your musical training and whom did you study with?

I took piano lessons in high school with this genius pianist, a retired  professor from the Cleveland Institute of Music, Betty Zimmer. My composition and orchestration training comes from Nancy Galbraith at Carnegie Mellon University. I learned the basics of conducting from Denis Colwell (head of the CMU School of Music) and Thomas Douglas (the School of Drama’s musical director and voice teacher), the latter of whom taught me how to deconstruct and appreciate musical theater song structure.

What was your first professional job as a musician?

I actually was hired pretty frequently to play background music at parties and such since I was about thirteen. So I have to thank my parents for driving me around to gigs all the time. I also had my first paid gig as a musical director in tenth grade, a production of Peter Pan put on by a Cleveland area community theater, Silhouette Productions. 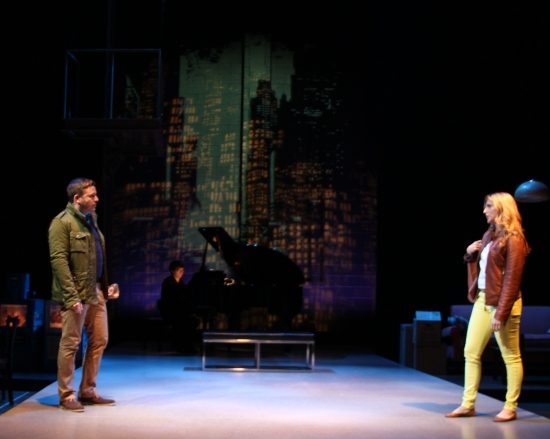 L-R Will Gartshore, William Yanesh in foreground at piano and Janine DiVita in Ordinary Days. Photo by Danisha Crosby.

How do you best describe the styles of music in Ordinary Days?

Adam Gwon has talked about the strong presence of Ahrens and Flaherty as mentors of his, and you can hear Flaherty’s style all over. This kind of highly pianistic, heart-on-your-sleeve but sophisticated pop-rock feeling pervades a lot of it, particularly the warm, gorgeous chord progressions in the “Rooftop Duet.” There’s also an undeniable Sondheim-esque edge to a lot of it. The jagged feeling of the accompaniment to “Fine” is a good example.

I first saw you musical direct A Grand Night for Singing at the Washington Savoyards. Since then you have worked at such venues as Adventure Theatre MTC, Signature Theatre and now Round House Theatre. What has the ride been like for you so far working as a musical director in the DC area?

I sometimes can’t really believe it’s happening. I owe so much to people who vouched for me and took a big chance on me. The late Amy Antonelli, who was the assistant dean of music at Catholic University, changed my life in a way I don’t think she ever knew, kind of discovering me playing cocktail music at a birthday party and writing my info on a napkin since I had no business cards at the time. She passed my information on to Thomas Pedersen (of CUA and the Savoyards), who in turn connected me to Michael Bobbitt of ATMTC. While working together on Winnie-the-Pooh there, James Gardiner passed my info to his brother Matthew at Signature, who also connected me to Round House. You just don’t think things happen that way in real life.

What is next for you after Ordinary Days?

I’ll be returning to Signature in the fall to conduct Elmer Gantry from the piano. I’ll be working with Vadim Feichtner, (musical director of the original Off-Broadway Ordinary Days—small world!) which I’m very excited about. I’m also geeking out about getting to work with Joe Calarco in December on Round House’s musical of The Nutcracker. In the meantime, I’ll be playing a handful of Signature’s Sizzlin’ Summer cabarets: I’ll be accompanying Natascia Diaz, ErinDriscoll, Maria Egler and Stephen Gregory Smith.