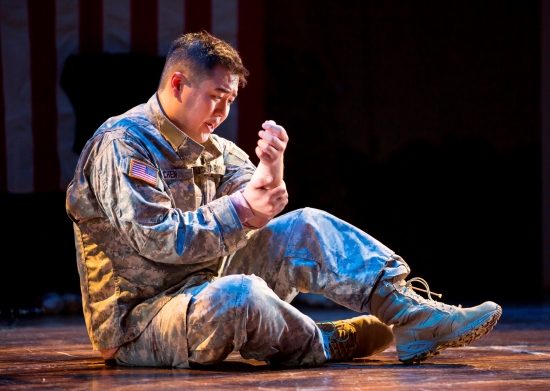 Do we ever know the whole story when it comes to the military? Why do officials that should know better always get away with horrific things? These are the questions posed in a new opera called An American Soldier written by Huang Ruo (music) and Pulitzer and Tony Award winning writer David Henry Hwang (librettist) and is part of Washington National Opera’s American Opera Initiative at the Kennedy Center.

The story is based on a true incident. In 2011 Danny Chen (Andrew Stenson) an eighteen year old Chinese-American from NY decides he wants to enlist. His unit eventually is shipped out to Afghanistan. Sgt Aaron Marcum (Trevor Scheunemann) does not like Danny from the start and taunts him with names like Madame Egg Roll. Things get worse when Chen is basically hazed by Marcum and his fellow soldiers. Marcum then commands Chen to go to the guard tower. He does and promptly kills himself, presumably from humiliation. The question is would Chen have killed himself anyhow from the pressures of the job or was it due to the hazing incident? Mother Chen (Guang Yang) takes the military to court wanting as many answers as she can get regarding her son’s death. The military says it was suicide. His mom thinks it was something else. You have to decide for yourself but let’s say you might not agree with the outcome portrayed here.

Musically Huang Ruo’s score and thirteen piece orchestration conducted by Stephen Jarvi is at times lilting and moving like in the section between the spirit of Danny and his mom. However, it is more often than not dissonant, which make the music sound sharp and grating on the ear.

David Henry Hwang’s libretto is excellent and tells the story in a clear concise manner. Hwang captures the anger of Mother Chen while giving us an unflinching look at how the military handles certain kinds of incidents.

Director David Paul keeps the staging honest and brings out some wonderful performances from the cast. For example, mezzo-soprano Guang Yang as Mother Chen could have been played as a screaming Mimi but her emotions are kept under control so what you get is a composed woman in the courtroom who is dying inside. This is the correct choice for the character and Yang’s voice is heavenly to listen to.

Bass Solomon Howard as Judge Advocate once again proves that opera singers can act. This is the third time I have seen Howard and his booming voice and imposing presence is always a welcome addition to any WNO production.

Baritone Trevor Scheunemann is terrific as Sgt. Marcum. Yes you want to strangle him for what he did to Chen and that is precisely what you should feel. The portrayal of a man with no sensitivity should make you feel uncomfortable and Scheunemann’s performance accomplishes that.

Last but not least tenor Andrew Stenson brings out all of the raw emotion that Danny Chen needs and his voice is simply gorgeous. Be it a solo section or opposite Yang, Stenson is a performer I hope to see again soon.

Paul Taylor’s sets get us from location to location with ease and A.J. Guban’s lighting enhances the action while setting appropriate moods throughout.

Despite a sometimes rough listen musically,  An American Soldier is an important piece and one I hope gets a few more productions around the country. Chen’s story is one that more people need to hear and even with President Obama signing a federal anti-hazing bill, which was inspired by Chen, military hazing is still happening. Maybe An American Soldier can help in making this kind of thing stop. If nothing else, as in all of his work, David Henry Hwang again gives us a lot to think about.

Running Time: 68 minutes with no intermission.

An American Soldier plays through June 14, 2014 at the Kennedy Center’s Terrace Theatre, which is located at 2700 F St NW, Washington, DC. For tickets, click here.