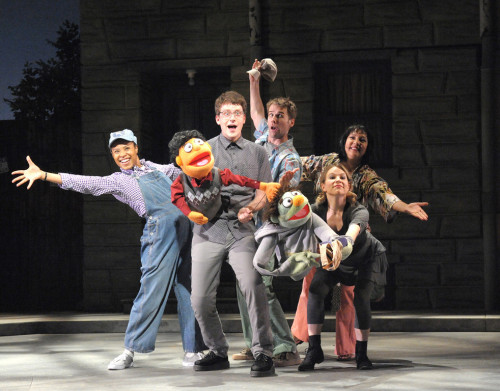 If you never contemplated your purpose in life, raise your hands.  Not that many rose I see.

Identifying one’s purpose in life is the central theme in Avenue Q—a clever, funny, poignant and uplifting story of young adults navigating their way through real-life’s unforeseen challenges to fulfill their dreams.  The satirical musical, currently playing at the Olney Theatre Center, also has its raunchy, racy and potty-mouthed moments.

In a unique device for musical theatre, Avenue Q uses puppets as part of the storyline. They combine the joy and brashness of those loveable characters seen in PBS’ Sesame Street from which Avenue Q’s characters were inspired and parodied by Robert Lopez and Jeff Marx who wrote the music and lyrics with the latter having interned at the program earlier in his career.  The irony is that the characters represented in Avenue Q’s puppets deal with adult themes contrasting with those on the children’s TV show Sesame Street.  The book was penned by Jeff Whitty.

Issues and anxieties that young people must grapple with include finding an apartment, looking for a job, falling in love and avoiding commitment.  The show also touches on racism, pornography, and acceptance of gays.   These challenges, serious as they may be, are presented in a witty manner that will keep you laughing throughout.

All but three of the characters in Avenue Q are embodied by puppets as the actors double as puppeteers.  It’s not an easy task to coordinate the puppets’ mouth movements with the dialogue and their physical movements with the music and choreography, but the actors pulled it off splendidly.  The three human characters ignore the puppeteers and interact directly with the puppets themselves, and the audience is asked to do the same.

Avenue Q, a three-time Tony Award winner, including Best Musical, ran for 2,534 performances on Broadway from 2003-2009 plus the spawning of other national and international tours and productions.  Olney’s mounting of this Broadway classic not only does the show justice, under the precise direction of Olney’s artistic director Jason Loewith, the production excels on so many levels.

Before I discuss the performances by the young, attractive cast, I feel compelled to single out the extraordinary work of Lighting Designer Andrew Griffin.  His use of a full range of hues, spotlighting, and shifting the lighting around the stage to augment scene changes provides a dimension that adds even more vibrancy to a most vibrant production.

One would think that with such song titles as “If You Were Gay,” “Everyone’s a Little Bit Racist,” and “Schadenfreude” the topics would be serious.  Well, they are, but are executed in a way that are simultaneously amusing and thought-provoking.

Christopher Youstra, who has directed or conducted approximately 30 musicals at Olney alone, did his usual masterful job from the piano in leading his six-piece orchestra that is seated on top of the set through the enjoyable score, ably supporting the performers’ strong vocals.

“The production excels on so many levels.”

The show’s main character is Princeton (Sam Ludwig), a recent college graduate with a B.A. in English who winds up on Avenue Q in some outer borough of a large city to find an affordable apartment.  He encounters a variety of oddball characters including “monsters” in the neighborhood who seem nice and have their own challenges in meeting their individual goals.  But in the end, they have one thing in common: to find their purpose.

Princeton’s romantic interest is Kate Monster, played tenderly by Rachel Zampelli.  Her chemistry with Princeton (through their use of puppetry) clicked well.  Ms. Zampelli’s performance in “There’s a Fine, Fine Line” showcases her lovely voice in one of Avenue Q’s more melodious numbers.  She also demonstrated her comedic skills in playing the sultry seductress Lucy—also a puppet.

Mr. Ludwig, who starred in Olney’s season opener How to Succeed in Business Without Really Trying, turns in another skilled performance as the vulnerable, nerdy, good-hearted Princeton who has trouble with commitment.  In addition to his excellent timing and action around the stage, Mr. Ludwig also shows his vocal prowess in “Purpose” and other group numbers.

Roommates Nicky (Stephen Gregory Smith) and Rod, the closeted gay man (also played by Mr. Ludwig), are a great team in the “Bert and Ernie” mold.  Their performance of “If You Were Gay” was fun and well executed.

Another duo is comprised of Brian, an aspiring comedian (Evan Casey), and Christmas Eve (Janine Sunday) his eventual Japanese wife.  Though Brian is the comedian waiting to be discovered, it is Christmas Eve who delivers many of the funny lines in the show.   Ms. Sunday’s voice is outstanding in the duet with Ms. Zampelli in “The More You Ruv Someone.”

Other characters added to the joy of Avenue Q.  One of them is Gary Coleman—yes, the actual late celebrity inserted in a fictional plot—played by Kellee Knighten Hough.  The role is that of a building superintendant and has some comical lines amidst the parody.

Mr. Smith who also played the porn-addicted Trekkie Monster and Tracy Stephens and David Landstrom as the mischievous Bad Ideas Bears, round out the loveable cast.  All do a sterling job in bringing their characters to life onstage with energy and warmth.

Rosemary Pardee designed the costumes creatively.  Rich pastel colors are worn by the human characters while those manning puppets were in shades of gray so that the puppet’s bright colors stand out.

The set designed by Court Watson is attractive and functional.  Two rundown apartment buildings with a street sign “Avenue Q” on the corner provide the backdrop to the action.  The buildings contain two floors with lights inside the windows. Even graffiti appears on the façade.  Steps to resemble concrete in front of the stage are also used by the performers at various moments.

Also, a wonderful touch is a billboard above the buildings that serves as a screen for occasional animation and one-word themes, such as purpose, race, gay and commitment as the show progresses.

The creative team, the performances, the direction and the loveable puppets make the show enjoyable to experience.  You may not want to live on Avenue Q but you should definitely visit it.

Running time. Two hours and 15 minutes with an intermission.

Advisory: This show contains adult language and sexual situations and is not suitable for children.