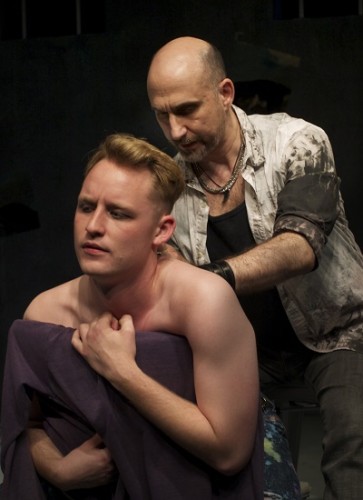 Tanner Medding as Canvas (L.) gets “inked” by Steve Satta as Artist. Photo by Daniel Ettinger.

In true Iron Crow form, the production takes an unconventional script with edgy themes and sexuality infused throughout.  Being the only queer theatre company in Baltimore, Iron Crow has consistently produced plays featuring a gay angle with some containing a good dose of homoeroticism.  This production follows that model.

Converting this premise to a modern scenario, Bartlett writes about a mysterious powerful man who is never named nor appears on stage (the Zeus character), sending a beautiful 17 year-old boy (Ganymede character) to a tattoo artist (Hephaestus character) to get a large work of ink on his back to be a sort of rite of passage to manhood as he approaches his 18th birthday.  What ensues is a perplexing blend of symbolism, intensity and erotica, and often how one gets from Point A to Point B in the plot is not always clear.

Despite the play’s lack of clarity in places, the performances by the two-man cast and the precision of the technical team under the direction of Ryan Clark make for an entertaining experience.  Clark, who directed “Trick,” one of the better segments in Iron Crow’s recent The Homo Poe Show, does a superb job of helming the production.

Steve Satta, Iron Crow’s artistic director, has either directed or appeared in virtually all of the company’s plays over the past few years.  In this installment, Satta plays the tattoo artist who is the object of the boy’s real affection. Throughout the play, he contends with the boy’s restlessness and sexual desires while administering the “ink” on the boy’s back.  Satta turns in a solid, competent performance as the mostly low-keyed artist contrasting with and ably complimenting the boy’s hyper personality.

Playing the beautiful Ganymede-equivalent is not a stretch for Medding.  Handsome, blond with a lithe torso, Medding is shirtless during most of the play making for an appealing visual, especially for those who appreciate such images.  His Ganymede character is quite aware that he is the most beautiful male on earth with his swagger and words.

Medding displays a full range of emotions evolving into a sympathetic character who has been taken advantage of and raped throughout his youth and failing to fulfill his lust for the older, rather detached Artist.  He adeptly and energetically moves about the stage, providing most of the play’s action, force and passion.

Both Satta and Medding exhibit various moments of mellowness and intensity and carry it out competently.  Their on-stage chemistry is quite palpable in their performances and drives the play.

Veteran Set Designer Heather Mork created a bleak venue for the action with plain walls containing tattoo designs, a bed, footlocker, a door for the occasional entrances and exits by Canvas, a table with tattoo equipment, a chair, stool and basement windows that allow the lightning to flash through.

The presence of Zeus throughout the play is evident by the frequent thunder and lightning.  Alec Lawson’s lighting design amplifies the play’s myriad emotional turns.  Jessye Black effectively makes the thunder boom.

Advisory: The play contains sexual situations, adult language and is not suitable for children.