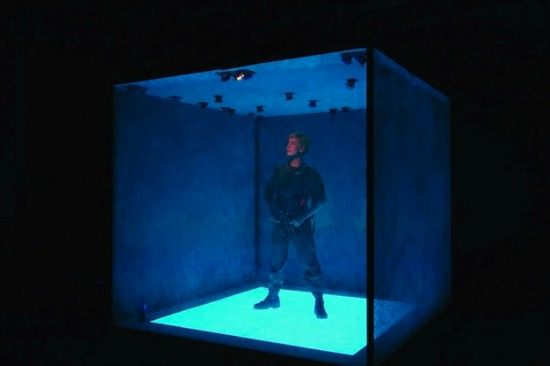 Lucy Ellinson is the pilot in “Grounded” at Studio Theatre. Photo by Igor Dmitry.

In the Gate Theatre production directed by Christopher Haydon, she’s behind the mesh of the show’s six-foot cube, looking almost like a statue of a soldier from the ages. But rather than standing at the ready, we learn as the show begins, she’s admiring herself in the mirror.

A member of the Air Force fighting unit, she loves her flight suit and loves looking at herself in it. In the one-hour one-woman play by George Brant, Ellinson’s pilot is in love with her life, romanticizing about the blue in which she flies and bragging about it to guys in bars.

She tells us all this in the monologue; we don’t see any of it happening. But once she becomes close to one guy at the bar she learns she’s pregnant, which takes her right out of the Air Force and into the Chair Force — the corps of people who sit before computer screens and operate by remote control the armed drones halfway across the globe.

The humanity she finds in her own family is her undoing in her cube, where killing becomes much less abstract and collateral damage more personal.

It leads to a compelling climax with a sense of impending doom that almost warrants the direct, single-minded approach (though not quite).

It’s great that the moral questions raised by the grim advance in impersonal technology is being addressed on the stage; for all of its global effects, immediate as well as slowly brewing in planned retaliations and greater hatred, drones aren’t often addressed on or off the stage.

That it took a British playwright and actress in a production that was a big hit at the Edinburgh Fringe and is wrapping up Studio’s New British Invasion Festival suggest that Americans aren’t quite ready to address the monster of their making themselves (although the television show “24” currently is).

Much of the success of Ellinson’s performance is due to her mastery of the American accent; no one would question her character’s U.S. citizenship. But the tone of her voice is softer and more melodic than one would expect of a rah-rah flyer; sometime one has to strain to hear her, whereas a super patriot flyer would be fairly shouting her pride (preferably with that faux Southern twang that pilots have affected since the days of Chuck Yeager).

As effective as the box created by set designer Oliver Townsend is, there are moments when its interior overhead lighting by Mark Howland naturally obscures some of its corners for audience members, depending on where they’re sitting.

When Ellinson ducks into one of those corners, she seems to disappear.

I thought at first that the projections by Benjamin Walden would spread across the scrims that wrap the box — all the different screens and targets flashing before us. But it’s probably better that they’re kept to the bottom of the box, reflecting on the actress but never obscuring her.

Along those lines, sound designer’s Tom Gibbon’s audio ranges from the blast of AC/DC during the Vegas mountain commute to the deadened blasts from afar that make them seem all the more sinister.

“Grounded” plays like a fringe production – holding a stage for an hour, with no intermission. But as a play it needs a little more development for a night of theater.

Still, its focused approach ensures it lands its important message forcefully with the stealth of the drone itself.

Running Time: One hour, no intermission.

Advisory: The hell of war is pocked with vulgarities.