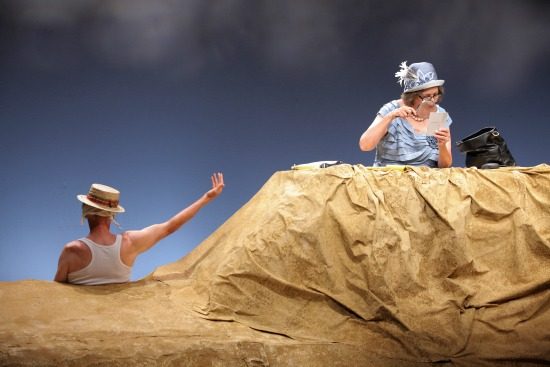 The role of Winnie in Samuel Beckett’s “Happy Days” is supposed to be one of the prized roles for women of a certain age. “One of those parts,” Dame Peggy Ashcroft once said, “actresses will want to play in the way that actors aim at ‘Hamlet.’”

That it has to be played covered in dirt to her torso and later, under a mound piled up to her neck tells you something about the number of prized roles there are for women of a certain age.

That the current SCENA production stars Nancy Robinette, who was their Mother Courage five years ago and earned three Helen Hayes Awards on some of the most prominent stages around town, alone makes this production worth seeing.

“…Whatever she seems to do as Winnie, Robinette makes it work…”

Determined to be cheery despite the world’s weight, which literally closes in on her, she’s splendid in the role, reciting the absurdities in Beckett’s script and getting the most out of its oddest non sequiturs.

For most of the play, directed by Robert McNamara, she is addressing Willie, played by Stephen Lorne Williams, who largely has his back to the audience, when he is seen at all, as he briefly reads from the classified in act one, and crawls up the dirt pile to end act two.

But this is fully Winnie’s — and thus Robinette’s — show, a reverent homage to the rarely performed Theater of the Absurd nugget (which has nothing to do with the Fonz, Richie or 60s nostalgia, though it was also first produced in 1961).

Put simply, this is a woman in a pile of dirt who chirps about cheerfully nonetheless. As in Beckett’s best known play, “Waiting for Godot,” it’s more about what’s not there than what is. We are given no explanation about how she got this way or why.

As Winnie picks through and enumerates the contents of her purse, or tries to read what’s written on her toothbrush, what she says can be taken as pure comedy, as when she muses, “What is that unforgettable line?” about a line she clearly can’t remember.

Or it could be just taken as a kind of jangled, modernist free verse. (When she pulls out a handgun, she says, presciently, “Not again”).

Whatever she seems to do as Winnie, Robinette makes it work.

The actress is pictured in ads for Happy Days wearing a feathered hat and a chipper smile though buried to the neck in earth, a handgun lying nearby compounding the absurdity.

But full stage dressing does not have the ease of PhotoShop, so she sits atop a mound meant to be dirt as if at a desk. Indeed, that may be the underpinning of Michael Stepowany’s design, with the seaside mounds of sands depicted by canvas stretched between boxy forms, the fabric’s seams clearly in sight.

That’s a disappointment, because if there is ever an excuse to stage a play with a woman up to her neck in dirt, it should be this one. Alas, in act one she seems so comfortable in the setting, it looks as if she is hosting a talk show.

Which would explain how uncomfortably cold it is in the theater.

Guests often complain about how cold it is in David Letterman’s studio. But it couldn’t be  more frigid than the Atlas Performing Arts Center whose air conditioner was set at utterly, distractingly, end-of-global-warming freeze. If that had been part of the intent; had they been doing a production of “Frozen,” say, it would have worked. But as this is set on a beach, I’m thinking it worked against the play’s intent.

Yes, I should have brought a sweater (or parka). But there seems no reason to chill a house to distraction. It made me realize that, although uncredited, temperature control is every bit as important as lighting design in presenting a successful night of theater.

There were other minor annoyances in the production — why have a recording of a music box or a bell ringing, denying the intimacy that is otherwise created? Likewise, why have her pantomime brushing her teeth and fake spitting? Why not a real brushing?

And though lighting director Marianne Meadows’ even sunlight is highlighted by a fluffy fixed cloud on a blue backdrop, it shook at one point as someone obviously rattled the projection by mistake.

But maybe that was just another one of life’s absurdities. Like the guy on the X2 bus after the show who kept bellowing about going to the White House to talk to the president about what sounded like “Fava Day.”

That whole scene might have made for a good Theatre of the Absurd one-act as well.

Which means that after all these years, Beckett either is still very good at reflecting everyday absurdities, or remains successful in allowing us to see more vividly the existing absurdities all around us. I choose the latter.