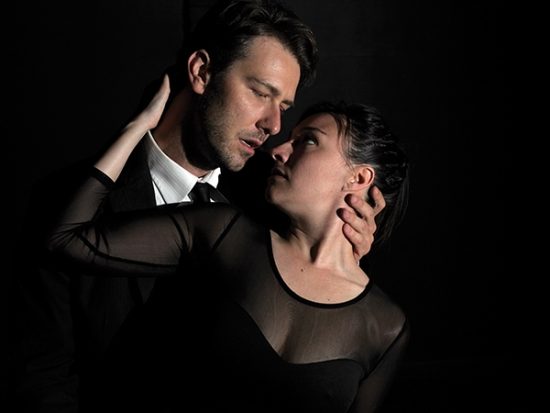 SeeNoSun OnStage’s production of Tracy Letts’ 1993 play, Killer Joe, is not for the faint of heart. Rarely produced and replete with memorable scenes, graphic language and sexual content usually reserved for film, Killer Joe is a visceral, graphic and indulgent experience. You have been warned.

The DC Arts Center theatre seats forty and the distance between actors and audience is mere feet. It is a rare and wonderful thing to be so close to the stage and its actors. Director Michael Wright takes full of advantage of his theatre space, choreographing both violent action and sexual conflict mere inches from the feet of his audience. Intimate in its entirety, Killer Joe is bottled exclusively within a mobile home in a trailer park. The outside world appears inconsequential and can only be briefly glimpsed through a sheer, gauzed panel cut into the stage wall. Wright’s stage set is at once minimalist and gleefully white trash, the almost constant presence of TV static is notable and telling.

All of the performances in Killer Joe are masterfully professional and brave. Dark humor abounds and the show relies heavily on the palpable chemistry, comedic timing and realistic interactions of its five characters. Of particular note is Davis’ complex and physically demanding portrayal of the perverted, violent Joe, Osborn’s naive and ageless Dottie and Marcus’ insistent and powerful interpretation of the disillusioned and desperate Chris.

Ultimately, SeeNoSun OnStage succeeds in their mission to transport their audience outside of their comfort zone. Go and see Killer Joe, but bring a friend; you will need someone to talk to about what you have seen.