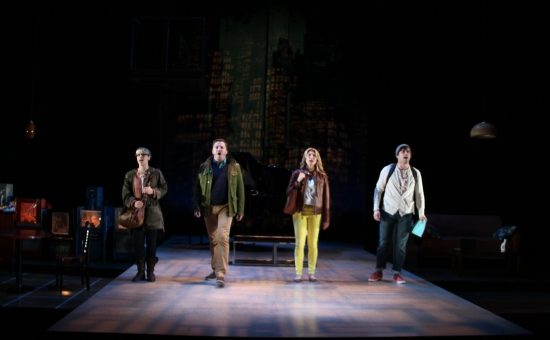 Nothing pleases me more then when theatre companies choose to stray from the old style of musical and present something that is not from the 50s or before. Mind you, I love Rodgers and Hammerstein, but the new crop of writers deserve as much exposure as the old masters. Round House Theatre is currently presenting such a musical.

Ordinary Days is a song cycle by composer/lyricist Adam Gwon whose work you might remember from a few seasons back at Signature Theatre with The Boy Detective Fails.

The chance to see something a little different should be reason enough for you to attend.

Gwon has set his story of four people in NYC. There is the starving artist Warren (Samuel Edgerly), and a college student working on her thesis named Deb (Erin Weaver). When Deb leaves her research on the subway, Warren finds it and this leads to a meeting at MOMA. Then there is our couple Jason and Claire (Will Gartshore and Janine Divita).Claire is having a hard time committing to marrying Jason due to something in her past that comes clear later on. Through Gwon’s excellent score, we follow the two couples for a fast paced 75 minutes as Deb and Warren warm up to each other after their first meeting and Claire starts to come around on the marriage issue (not revealing the outcome).

Ordinary Days is a very small musical with four actors and a pianist, in this case, the very talented William Yanesh. The fact that Round House Theatre chose to do this show is a decision I wholeheartedly applaud but the venue itself is too big for the show’s intimacy. Even with Misha Kachman’s scenic elements which include blacking out half of the stage and having a ramp come closer to the audience, it can’t hide the size of Round House’s good size deck. This also poses a problem for one of my favorite directors Matthew Gardiner. His staging is always well done and this show is no exception, but it’s very hard to feel something for your characters when you are far away from the stage. Certain sections that ripped my heart out when I saw the show in NY just didn’t pack that punch that I hoped for. Again, this is more on the venue than Gardiner.

Performance wise the cast is almost uniformly great. Samuel Edgerly and Erin Weaver as Warren and Deb have great stage chemistry in such numbers as “Sort-Of Fairy Tale” and “Beautiful.” Solo wise Weaver wows with “Don’t Wanna Be Here” and “Calm.” Will Gartshore held me all the way through in “Favorite Places” and the lighter “The Space Between.” My biggest problem is with Janine Divita’s interpretation of Gwon’s masterpiece called “I’ll Be Here.” Here is a song where the performer has the chance to pour her heart out to the audience about the loss she feels over losing her true love. Between a faster tempo than the song should have and Divita’s robotic vocal, all I can say is “what happened?” Divita does fare better however with “Let Things Go” and “Gotta Get Out.”

In the end Ordinary Days at Round House Theatre comes off as more ordinary than memorable. If you can get past the fact that the show needs a more intimate setting and concentrate on the singing and Gwon’s musical treats, then you will have a good time. The chance to see something a little different should be reason enough for you to attend.