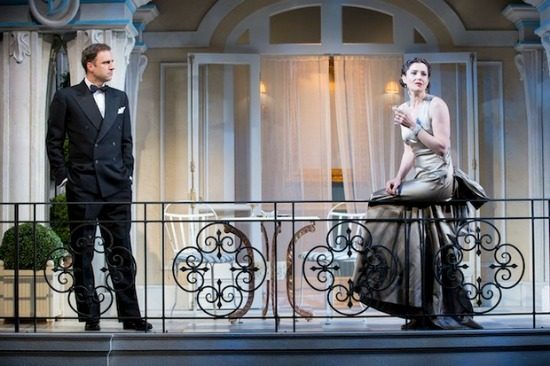 You’d be hard pressed to find a better night at the theater than the terrific production of Private Lives at the Shakespeare Theatre Company.

Doffing the Bard in a season where they’ve previously presented Oscar Wilde, the sophisticated Noel Coward play isn’t showing a speck of dust at 85. Rather, it breezes along like the winds of the unidentified South of France resort where it begins and continues to zing in the Parisian hideaway in the concluding two acts.

Every aspect of the production is top-notch – from the assured comic presence of the cast to the beautiful sets by Allen Meyer and sparkling direction from Maria Aitken. I can’t remember many nights of theater where I’ve smiled from beginning to end. So I guess you would say this is a rave.

Like a lot of Shakespearean romantic comedies, this one deals with the mixing and matching of a couple, though this one is distilled as one of the martinis they sip onstage.

It involves the worldly and often sarcastic Elyot, off on his honeymoon with his second wife, the excitable waif Sibyl who is very curious about his first wife, Amanda, who happens to be in the adjoining balcony, celebrating her own honeymoon to her second husband.

As the two talk poorly about their exes inevitably they catch eyes and confront one another. Within their revulsion and surprise is something else: The same spark that attracted them in the first place.

Their dialogue seems to speed up as they realize their intellectual equals who excited them so long ago is working between them again. Unlike their pleasant but dull new spouses, here was some real fireworks, which also turn into just plain fire.

So volatile is their connection they have to devise a safe word so they can cool off when things get out of control.

And sometimes that doesn’t even work (any resulting fisticuffs in the domestic quarreling is the only truly outmoded thing in the comedy).

This Private Lives works because its director and cast is so well-versed in the material, steeped in it you might say, like an olive in one of their martini glasses. Director Maria Aitkin in fact has the distinction of starring in more Coward roles than any other living actor.

But it’s hard to picture a much better Amanda than Bianca Amato, so sleek and alluring in her role, bristling with wit and languor. James Waterston is every bit her match as Elyot, full of witty put downs and brash honesty that stops just short of caddishness.

As his new wife, Autumn Hurlbert puts a lot of extra comic business into her role. She also has to do a lot of wailing. Jeremy Webb is left with less to do as the stuffy Victor, but has his moments in the third act as well.

Few are the plays where three acts and two intermission are welcomed. But for this one, the second act is punctuated with delightful dance and song amid the volatile love nest.

Candice Donnelly’s costumes are as luxurious as Moyer’s detailed sets; Phillip S. Rosenberg’s lighting subtly suggests the water reflecting on the moonlit balconies; the sound design by Rob Milburn and Michael Bodeen hint at the songs played from afar that set off the couple in question.

Advisory: Amid the smoldering marital affairs, no cussing. There are episodes of domestic abuse played for laughs, though.