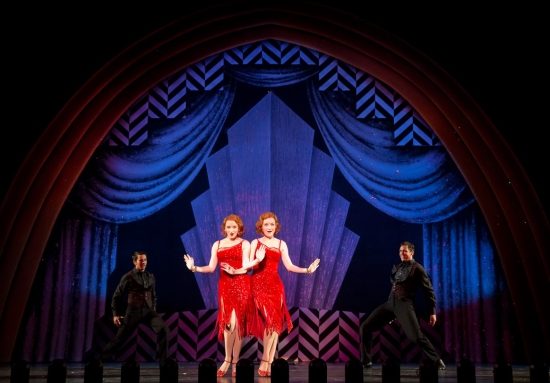 Some Broadway musicals fail because of a bad score, book or dreadful physical design. The 1997 musical Side Show had all three of these elements going for it when it opened at the Richard Rodgers Theatre. What did this gem of a musical in was the producer’s inability to properly market it to the public, even with favorable reviews. In the producer’s defense, a musical about Siamese twins is a rough sell.

The current production at Kennedy Center’s Eisenhower Theatre features a few songs cut from the original version and additional book material by Hollywood director/screenplay writer Bill Condon. Bill Russell (book and lyrics) and Henry Krieger (music) set the story of sister Daisy and Violet Hilton (Emily Padgett and Erin Davie) against the backdrop of, what else, a carnival side-show in Texas, which is run by a man known only as Sir (Robert Joy). Daisy is the stronger skinned sister while Violet just wants to be like everyone else and not be stared at or thought of as a freak. There we meet the typical circus oddities including, a bearded lady, two Russian dwarfs and an African American named Jake (David St. Louis) whose act is that of a cannibal.

When Terry Connor (Ryan Silverman) and Buddy Foster (Matthew Hydzik) arrive at the carnival tent, they promise to take Daisy and Violet away from Sir and to a better life in vaudeville on the Orpheum circuit. Jake who is sweet on Violet is asked by the girls to come along. Sir’s position is that he raised the girls and he has sole custody. A court thinks otherwise and considering Sir’s living conditions for his performers are quite deplorable and he is exploiting everyone, the girls and Jake say goodbye to the side-show. As the story progresses a “romance” between the two girls and their managers starts. While Violet wants marriage to Buddy, he will only go through with it if only for show. Jake tries to convince Violet that she is in love with him but for obvious reasons of the late 1920s and early 1930s. Ultimately the girls get to Hollywood but not in the way they would like.

The score is one of the best in musical theatre history.

Let’s just get one thing out of the way. I saw the original production of this show twice and nothing might ever top the performances of Alice Ripley, Emily Skinner, Norm Lewis and Ken Jennings. But more than that, director Robert Longbottom presented the material honestly and without any of the obvious gimmicks. The performers were not fully costumed in freak like make up and the set consisted of two large circus bleacher type units. By using this approach you realize that Daisy and Violet’s story of low self-esteem and exploitation could be anyone’s. The people who worked in these places didn’t want to be there but it’s the only work they could get because of their appearance and many thought very low of themselves.

Director Bill Condon gives us a more realistic approach which includes a full carnival set designed by David Rockwell and the performers in full freak garb. This approach might work if you need everything spelled out for you, but for me, all it did was rip the guts out of the underlined story. There is an added section which does help you understand why the Hilton sisters ended up where they are but it looks like something out of a Roald Dahl story. Condon has no experience directing for the stage and it’s quite obvious here. If this were a filmed version of the show, then the approach Condon took would actually work for the story but onstage it wasn’t happening like it should have.

Performance wise the ladies playing Daisy and Violet Hilton come off the best. Emily Padgett and Erin Davie put over songs like “I Will Never Leave You” and “Who Will Love Me as I Am” with the right amount of emotion but not necessarily the grit I would have liked. With lovely soprano sounds from both ladies it just came off a bit too tame.

I have always enjoyed Robert Joy’s work as a comedian, but his singing voice is not up to what Sir requires. Joy does however have the sliminess for the character and when he comes back to the girls looking for a job after his side-show closed, you wanted to say “Really?”

As the two love interests, I enjoyed Matthew Hydzik as Buddy more. He has an All American look to him and I did enjoy his singing and dancing in “Stuck with You.” Ryan Silverman as Terry sounds just like Raoul in Phantom, which is a role he has played many times. This, however, does not work for his big song with Padgett called, “A Private Conversation.” With way too much vibrato, Silverman’s acting came off much better than his vocals.

You have to give David St. Louis credit for trying to put over “You Should Be Loved” but it seems like the building anger that usually happens half way through never materialized. I did think that he had the brooding part down when it came to his acting. It’s interesting with St. Louis’ song there were two key elements cut for this production. The first is a 20 plus bar orchestra passage that has a cannibal drum drive to it which fueled Jake’s anger. The second is the omission of a very important lyric. It comes right after Violet says she can’t be Jake’s sweetheart.

“If I can see past your affliction, why can’t you see past mine?

Why do you care what people might say, why try to fit into their design?”

By going with a softer lyric the final build of the song is now less powerful.

The score by Krieger and Russell is still one of the most underappreciated of the 90s. The first lyric in the show “Come Look at the Freaks” is as visceral as any visual and songs like “Say Goodbye to the Side Show” and others already mentioned are very moving. Adding to the score’s musicality is Harold Wheeler’s stunning set of orchestrations as conducted by Sam Davis. Wheeler reduced his original 23 piece set of charts down to 15, and while I missed the other two trumpets and live harp, it still sounded very full. There are still five live string players and that is always a plus. The fact that four reed books were condensed to two and still had all of the voicings, is an accomplishment in itself.

The ensemble sounded very full in the opening and other choral sections and performed Anthony Van Laast’s choreography with great precision.

Paul Tazwell’s costumes are something to see while the makeup design by Dave and Lou Elsey make you feel appropriately uncomfortable.

Overall Side Show is worth seeing for a few reasons. The score is one of the best in musical theatre history and Padgett and Davie have a lot of  spunk and lovely voices. Condon’s approach might work for you but if Side Show lacks heart then it is no more than an oddity like the characters depicted within.