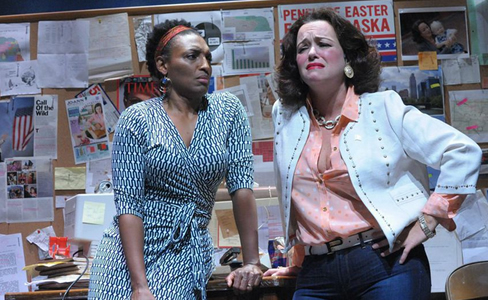 Dawn Ursula and Emily Townley in ‘The Totalitarians’ at Woolly Mammoth. Photo by Stan Baruh.

Politics is such a relentless, fulltime obsession in D.C., it may never occur to you to duck into a theater to take in more of it.

Peter Sinn Nachtreib’s The Totalitarians, which is closing the current season at the Woolly Mammoth Theatre, is a wholly immersive experience, where the lobby is decked out like a typically messy political warroom where visitors are invited to man phones, leaf through plans and draw on whiteboards before settling into seats.

There, the exaggerated satire takes place even as a high-powered campaign sloganeer wracks her brains for a phrase that will crystallize the path for the candidate who’s hired her.

It doesn’t matter that the candidate is vacuous blowhard with no ideas to impart, or that her eventual slogan means nothing. Part of Nachtrieb’s point is that words have been long since beaten into meaninglessness in a world where the recent bill to allow NSA spying came with the name The U.S.A. Freedom Act.

Nachtrieb’s decision to base his political theater in Nebraska – because he figures nobody has ever been there anyway – is part of his downfall at least with this reviewer, who put in nearly 20 years there.

Nebraska is indeed an unusual political area, one that would certainly warrant its own play. But it’s not this one.

Female politicians there are more likely farmer’s wives or Christian crusaders – certainly not the brassy cowgirl he has drawn up, who comes more out of a Texas cartoon. And while there have been dangerous extremists popping up among the prairie grass over the years, none are vaguely like the one he concocts to be the unconvincing menace here.

The playwright may have looked up a few exotic town names (Hay Springs) but if he’s failed to realize the overriding importance of football in a state that once elected a revered coach as U.S. Senator, it’s game over.

Indeed, it seems set designer Misha Kachman did more research – replicating the interstate’s welcome sign to “The Good Life” and an obsession with the distinctive art deco style state capitol, replicated twice (the second time as an odd horizontal zeppelin).

That said, those unfamiliar with the Cornhusker State may well be thoroughly entertained by the exaggerations here. But combining political ambition with violence has been done to death – in reality and in theatrical productions (No spoilers here – visitors are greeted with a sign that promises that guns will shoot during the performance).

The first images seen are the wholly unintelligible rantings of ski-masked extremists on projected video. And we move to the story of Francine Washington, the political writer behind the candidate Penny Easter.

The saving grace of The Totalitarians is that its cast and direction are so good it may make you forget about any lapses on the page. They bring the best out of the script and give it a necessary comic punch.

Dawn Ursula is a powerhouse as Francine, obsessed with her job so she can eventually leave the state (this part is true to life). Her husband Jeffrey, Sean Meehan, a versatile actor with the comic presence of Jason Sudeikis (and was lately seen in HBO’s “The Normal Heart”), nearly carries the show as her husband, a doctor. He encourages her to come up with her slogan, but hasn’t the heart to tell a patient that he’s dying.

That the patient also turns out to be the ski-masked terrorist (and more, as the play goes on) says more about the limits of four-actor plays. As Ben, Nicholas Loumos is the odd man out in the action and in the play. I couldn’t figure out what kind of accent he was doing and why. It didn’t suit a place where folks typically adapt twangs to show their rebel side.

But as the candidate in question, Emily Townley rises to the occasion and more. Here is a candidate written as a political cartoon, and yet she surpasses its limitations with a bigger than life performance that both makes her real, and makes her seem real dangerous.

As things escalate into sexual situations or violent showdowns, it almost seems that Nachtreib, author of boom, is toying around with his situations absently, as if with action figures.

The Totalitarians is a National New Play Network play having its “rolling world premiere” in DC. It has apparently changed some since its first production and ought to change more before its next.

That the cast and director Robert O’Hara inject so much zing into the material is a credit to Woolly Mammoth’s power. If it doesn’t come close to matching the political theatre outside the doors is more the fault of unceasing Washington political excess.