Theatre Review: ‘The Wonderful World of Dissocia’ at Theatre Alliance 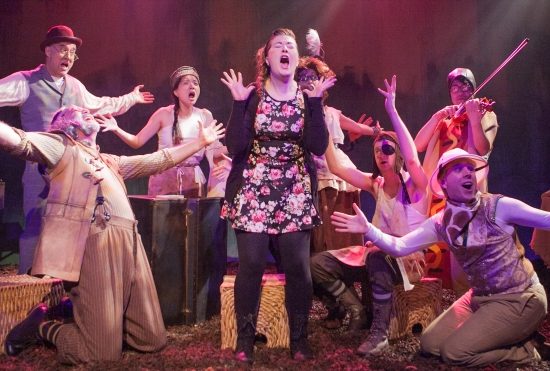 Theatre Alliance’s production of The Wonderful World of Dissocia at the Anacostia Playhouse is a delightful exercise in misdirection. Advertised as the fantastical story of a woman on a quest to retrieve a lost hour of her life (think an overtly sexual and violent Alice In Wonderland), The Wonderful World of Dissocia is replete with subtle British humor, absurdly dramatic situations, and, of course, humans dressed as animals.

In reality, pioneer Scottish playwright Anthony Neilson’s landmark and award winning play explores the “wonderful” world of a young woman struggling to decide whether to embrace a dissociative reality or live a medicated life that feels “heavy.” Neilson, a pioneer of the In-Yer-Face Theatre genre, does not shy away from the use of coarse language, loud noises, sexually graphic situations, and dark humor to emotionally engage and challenge his audience.

…a must see experience for the adventurous theatregoer or anyone who wants to take a break from reality…a delightful exercise in misdirection.

The Anacostia Playhouse’s theatre space is picturesquely assembled and playfully minimalist. The walls surrounding the stage are high and colorfully spray-panted. The stage floor is expansive and covered in a generous layer of plastic-cardboard pebbles, which add a wonderfully dream-like textural element to the stage. Approximately 100 seats are set on a gradual riser, looking down over the floor-level stage. The first row of seats sits level with the stage, mere feat from the action. Sit there if you are brave; you will thank me.

In the middle of it all sits our heroine, Lisa Jones (Karina Hilleard), surrounded by what we come to assume are her worldly possessions. She flits from object to object, looking bored, fatigued, and impatient.

Producing Artistic Director Colin Hovde asks a lot of our imagination. As the performance begins, the stage fills with an array of characters that look like they belong in a Victorian, Tim Burton-esque, whitewashed dream world. With the snap of an over-tuned guitar string, Lisa breaks from reality and descends in an elevator from her apartment into the land of Dissocia. Although The Wonderful World of Dissocia barrels forward at break-neck speed, Hovde manages to move swiftly and expertly through passages (notably, the singing polar bear) that might otherwise teeter on boring, kitschy, or both.

Throughout the performance, the stage set and lighting generates a feeling of personal closeness between the audience and Lisa on stage. The characters regularly step slightly offstage and often make direct eye contact with the audience. The intimacy created between stage and audience is profound. As the performance progressed, I began to feel complicit in the continuation of Lisa’s fantasy and, eventually, both invested in and resentful of her second act recovery.

The real stars of The Wonderful World of Dissocia are its talented cast of supporting actors. They often surprise the audience, and Lisa, with outlandish song and dance, all the while doing double and triple duty in a play that asks and displays every bit of talent on offer. Standouts of the night include Dissocia’s “Insecurity Guards” (Luke Ceislewicz and Carlos Saldana), Britney (Carolyn Kashner), the awkwardly beaurocratic Irish guardian of ‘Lost Property’, and Jane (Lisa Hodsoll), Lisa’s cheerfully battered and “novelty” bomb wielding government representative.

As absurdly as The Wonderful World of Dissocia began, it ends. The second act is as clinical and quietly contemplative as the first act is colorful, brash, and confusing. The lights darken in-between scenes as Lisa receives her treatment and endures numbing visits from her sister and her boyfriend. In the end, she must choose whether or not to continue life in Dissocia.

Memorable performances, brilliant staging, set and light design make The Wonderful World of Dissocia a must see experience for the adventurous theatregoer or anyone who wants to take a break from reality. A bonus is the opportunity to visit and support the lovely Anacostia Playhouse.