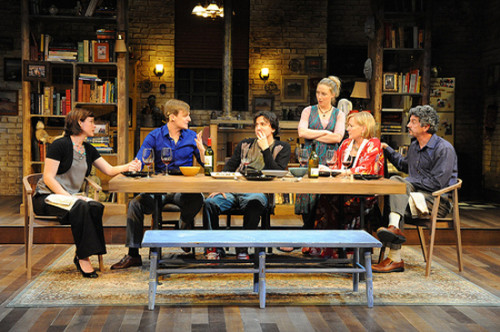 The cast of ‘Tribes.’ Photo by Stan Barouh.

Since the beginning of time, mankind has been made up of “tribes”– communities, groups, families – determined by many factors including race, customs or common interests. Everyone needs to feel part of something; a place to belong and to have a voice. For its final show of a spectacular season, Everyman is presenting the Baltimore premier of Nina Raine’s 2010 award-winning play, Tribes, directed by Founding Artistic Director Vincent Lancisi. It is a funny, poignant and thought-provoking story of a young deaf man from a hearing but (and what this company does best) highly dysfunctional family living in modern-day London.

Everyman is also breaking ground with the debut of an accomplished deaf actor, John McGinty, in the lead role as Billy. He has previously performed this role at Steppenwolf Theatre Company and The Guthrie Theatre. True to its mission of making theater accessible to everyone, Everyman is offering select performances with ASL (American Sign Language) interpretation. It is also one of the first theaters in the country to offer handheld,  personal closed caption device for all performances.

This is a very important production for both the Everyman and Baltimore audiences and should not be missed.

As the play opens, we are introduced to an eccentric family of intellectuals who are constantly fighting and insulting one another – punctuated with colorful curses. The father is Christopher (James Whalen) a pompous, arrogant academic who insisted on raising his deaf son, Billy, as “normal.” The idea of sign language is an anathema to him. Though well-intentioned to protect him, we later discover that this decision did not serve his son well. With the help of hearing aids, Billy’s novelist-mother Beth (Deborah Hazlett), patiently taught him how to speak and lip-read when he was a child.

Billy’s twenty-something siblings have moved back home. Daniel (Alexander Strain) is trying to live up to his father’s expectations and in the midst of writing his thesis. But he suffers from schizophrenia and hears voices which becomes increasingly worse as the play progresses. Ruth (Annie Grier) is the flighty sister who unrealistically has decided she wants to be an opera singer. Like the quiet eye of a storm, Billy sits in the midst of his family’s regular mealtime arguments, trying to catch what conversation he can.

Billy begins to blossom after a chance meeting with a young woman, Sylvia (Megan Anderson), at an art exhibit opening for the deaf. Sylvia was born hearing but is in the process of going completely deaf like the rest of her family. The two fall in love and move in together. She teaches him sign language and gets him a job with the courts to lip read videos for the prosecution.

It is clear that when Billy brings Sylvia home for dinner, this family’s world has been upended by his newfound independence. While the rest of the family is trying to understand Sylvia’s experiences in the deaf world, Christopher is at his politically incorrect best – or rather worse, implying that ASL is not even a proper language, among other implied insults.

What we all learn is that deaf people are like any other group. The deaf community has its own hierarchy, cliques and prejudices. Sylvia is caught in the middle, belonging to both worlds but belonging to neither completely. Ironically her standing in the deaf community is dropping as she loses her hearing while Billy is higher up on the ladder because he was born deaf. Sylvia gamely stands up to Christopher’s implied insults but it is a watershed moment in Billy’s life.

In the second act, Billy has reached a breaking point and silently explodes. He decides he will no longer speak but only use sign language to have it out with his family. It is a beautiful performance by both Anderson, who must translate for him, and McGinty, whose anger and frustration flow from his body and hands as he signs. Anderson expresses the awkwardness as well as the passion of speaking for him. The irony is that the family has deteriorated since he left, especially Daniel. Billy may be the best of them and perhaps they are finally willing to “listen.”

One of the great treats of an Everyman production is the set. While set designer Daniel Conway could have easily constructed a single a kitchen or dining room setting, he has created depth – stairs lead to unseen bedrooms; the exposed brick; and see-through shelving with piles of books that separate the dining room from a fully equipped kitchen in the background. The attention to detail in every aspect of the design, including the props by Jillian Mathews, is amazing despite the fact that most of the action occurs in the dining area.

Lighting design by Jay A. Herzog is used very effectively to enhance Billy’s isolation. In select moments, when Billy and his girlfriend are communicating, closed captioning is projected above them as well as lyrics and bars of classical music and opera. Elisheba Ittoop’s sound design is essential – from the hip, contemporary jazz to the sounds of an orchestra tuning up right before the acts begin. While music soothes the voices in Daniel’s head, it plays havoc with Billy’s hearing aids. We also see and hear the discordant, buzzing sounds that Billy must be hearing.

While the first scene seemed a little forced (the script may be too self-conscience especially with the “colorful” language which was not as prevalent in the second act), the actors soon find their rhythm and momentum. However, they have yet to fully master the British accents which were more successful in The Dresser earlier in the season.

This is a very important production for both the Everyman and Baltimore audiences and should not be missed. The creative team has done an incredible job bringing this story to life and making this play accessible for everyone.

Advisory: May not be suitable for children. Contains offensive language.