Concert Review: The Midtown Men with the National Symphony Orchestra at The Kennedy Center’s Concert Hall 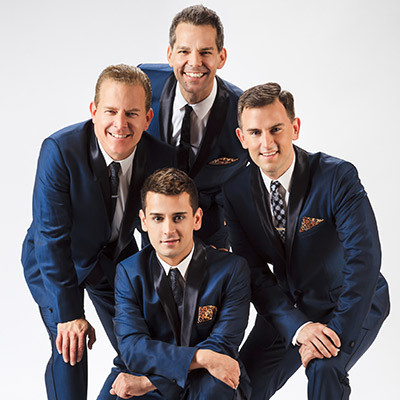 It was a sparkling finale of the National Symphony Orchestra’s Pops season with the debut of The Midtown Men, a successful vocal group comprised of four original cast members of Broadway’s Tony and Grammy award-winning Jersey Boys. (The legend himself, Frankie Valli will be performing at the Capitol 4th concert this year.)

The singers presented a celebration of the iconic music of the 1960s, including their love and connection to the songs of Frankie Valli and the Four Seasons. The orchestra, under the tight direction of NSO’s Principal Pops Conductor, Steven Reineke, did a brilliant job of backing the group without overpowering the vocals. In fact, it was Reineke who encouraged the four men to work with orchestras (now 17) and brought them to Washington, DC. The audience was rewarded with a fun and lively evening of music that brought them to their feet.

The Midtown Men is a talented and personable group of singers who present a fun and nostalgic evening of classic 60s music and…backed by a great orchestra.

Unlike some other pops concerts where there is more focus on the orchestra, Reineke smartly chose to put the spotlight on The Midtown Men. However, he and his musicians did have their moments to shine, opening with “On Broadway” and then introducing the second act with a piece commissioned by Reineke called “Ed Sullivan Welcomes the Beatles,” a medley of the five songs the Beatles sung when they debuted on the Ed Sullivan Show.

The singers introduced each other throughout the show with brief bios. While meeting and performing over 1,000 times together in Jersey Boys, they formed their own group in 2007. Since then, they have been in demand all over the country. The Midtown Men are Christian Hoff, who won a Tony for his role as “Tommy DeVito” in Jersey Boys; Michael Longoria who originated “Joe Pesci” and also performed in the “Frankie Valli” role (apparently on one occasion doing both in one evening); Daniel Reichard, who played “Bob Gaudio;” and J. Robert Spencer who starred as “Nick Massi” and then followed it up with a Tony nomination for his role in another stage hit, Next to Normal.

The Midtown Men, all dressed in slick Hugo Boss suits, opened with a medley of the Four Seasons’ “Working My Way Back to You,” and “Let’s Hang On,” which were bookends to Neil Sedaka’s “ Breaking Up Is Hard To Do.” If you have seen the stage production of Jersey Boys, this could be a sly and funny reference to a classic line in the show (it’s in the film as well). The harmonies of these four talented men blend together very well. Each had a chance to exhibit their own style in solo numbers and the performers also talked about some of their favorite stage memories.

Following the opening medley, Daniel Reichard was then featured in the Beatles’ “Can’t Buy Me Love,” and later brought down the house with his impassioned interpretation of the song he sang in Jersey Boys that first solidified the Four Seasons sound, “Cry for Me.” He also showed his chops with the The Drifters’ “Up on the Roof.”

Christian Hoff exhibited all the attributes that won him a Tony award. His first song was The Turtles’ “Happy Together,” backed with great harmonies by his fellow Midtown Men. His dancing was precise throughout and his lead on The Zombies’ “Time of Season” was a delight as well and included the most imaginative choreography of the evening performed by the group.

J. Robert Spencer was sporting a “Lincolesque” beard, for in fact he will be playing Lincoln in an upcoming New York production. He did a tremendous version of Marvin Gaye’s “Ain’t That Peculiar” as well as “California Dreamin.’”

Perhaps because of the rigors of touring, Michael Longoria periodically seemed to have issues in some of his solos – breaks on the high notes and growling in the lower registers. Despite that, he performed well, clearly enjoyed himself and was a big crowd favorite with songs that are spotlighted in the Jersey Boys musical – “Dawn,” “Big Girls Don’t Cry,” “Sherry” and the iconic “Can’t Take My Eyes Off Of You,” which he sang in the second half of the program.

The guys opened the second half of the show with a rousing song made famous by The Supremes and The Four Tops, “River Deep Mountain High.” Perhaps the highlight of the whole night was the Motown medley in the second act of the performance, which included “Too Proud To Beg,” “I Want You Back,” “Second That Emotion,” “My Girl,” “Just My Imagination,” and “You’re All I Need To Get By.”

The evening ended appropriately with Frankie Valli and the Four Seasons’ hit “Oh, What a Night (December, 1963)” followed by the encore, “Bye, Bye Baby.” The audience left singing and dancing and the guys even stayed after the show to sign autographs and take photographs with the fans, continuing to exhibit their sense of fun.

The Midtown Men is a talented and personable group of singers who present a fun and nostalgic evening of classic 60s music and, on this evening, backed by a great orchestra. So be sure to catch them the next time they are in town.