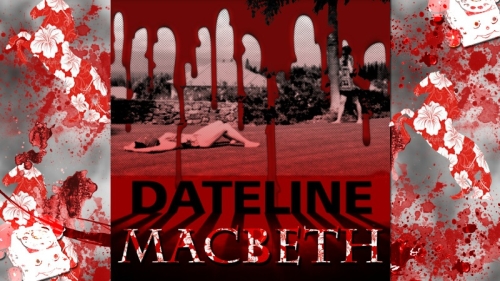 Quattro Gatti’s production of Dateline: Macbeth, written and directed by (and starring) Andy Hopper, is a strange, frequently funny, darkly morbid take on William Shakespeare’s classic tale of murder, guilt, and ambition. A small community theatre group on Maui stages a production of Macbeth starring an eighties television washout, Michael (Hopper). The story takes on a sinister twist (of course) when the director (Eric Doss) dies, Michael’s wife Kate (Amy Frances Quint) goes suitably insane while stepping in to direct, and other actors start getting picked off one by one.

I will say, I wasn’t sure what to expect from a play called Dateline: Macbeth. Macbeth itself is sensational enough. But this play takes it to a whole new level–the action is interspersed with scenes of a humorous Dateline parody, starring an overdramatic anchor (Hugo Armstrong) in a Hawaiian shirt set against a paradise background. The three witches are presented in the form of a response to a frantic 911 call, giggling at Kate’s misfortune, and the call itself is made on a child’s toy rotary phone.

‘Dateline: Macbeth’ is a little bizarre, but ultimately entertaining…

A lack of familiarity with the Scottish Play may make the viewing experience of Dateline: Macbeth a bit confusing–the modern dialogue is punctuated by scenes taken right from the pages of Shakespeare. The plot? Ditto. Still, you don’t need the direct contrast to see that Dateline is funny. The ancillary characters, Tina (Niamh McCormally), Stephen (Matthew Gunn Park), and Lenny (Luke Edward Smith) provide much of the comic relief, and all three actors possess excellent comedic timing. Park also demonstrates skill in playing the ukulele.

Dateline: Macbeth is a little bizarre, but ultimately entertaining, and pretty funny. It is definitely worth seeing.

Advisory: Recommended for ages 13 and up. This show contains profanity.