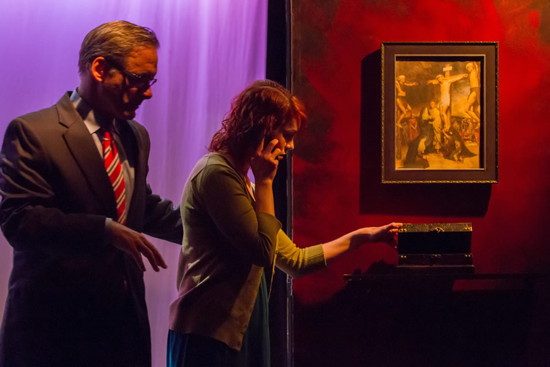 Dracula, A Love Story by Tim Treanor and Directed by Christopher Henley and Jay Hardee is a modern retelling of the classic Bram Stoker novel of 1897, Dracula,. Treanor’s Dracula is “married” to a dying Mina, and when Lucy answers his employment ad for a caretaker for his wife, Dracula realizes that he has found his new internal partner.

…’Dracula. A Love Story’ was a fun show…

Treanor’s story also concentrates on love and the importance of being “human,” to keep the ability to tell right from wrong and to put others before yourself.  Lee Ordeman as Dracula is very believable as an eccentric, other worldly being who is willing and able to do what he must to replace his long-time love with his new infatuation, Lucy.  Including killing anyone who gets in his way.

The first Act is playful, with quips by Dracula to his butler Renland (played by a very funny Josh Speerstra) like, “Get me a prostitute – I’m dinning in tonight.” And when Dracula asks Lucy what she thinks living forever would be like, she flippantly says, “Boring, I guess.”  Lucy is played by Carolyn Kashner, who does a fine job of playing a naïve woman who’s head is easily turned by the thought of finding true love, even from a man who does not believe true love comes from honesty and selflessness.

Overall, Dracula. A Love Story was a fun show, but the second Act didn’t go in the direction I thought it was heading.  I would have loved to see more camp like the first Act.