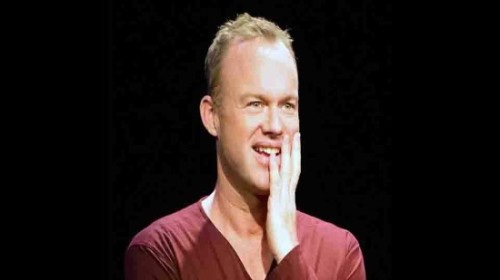 Stop the presses!! Master storyteller James Judd is back for his tenth anniversary at Capital Fringe with his latest show Killer Quack which features a story that you just can’t make up.

Dean Faiello was convicted in 2003 after killing one Maria Cruz with a lidocaine injection into her tongue. Cruz went to Faiello for a laser treatment of black hairy tounge. Faiello, rather than calling 911, put the body in a suitcase and buried it under his garage. As you can guess, Faiello was impersonating being a doctor.

…a remarkable solo artist with a story that keeps you interested the whole time.

Judd’s connection to Faiello had started when he went to have a tattoo removed. Faiello injected lidocaine into his arm as a pain-killer. After his conviction Judd started getting letters from Faiello in prison. Judd has been visiting him ever since. The obsession Judd has with Faiello is explained in the performance.

As a performer James Judd is totally engaging. He even makes jokes about how he would love to have made his first entrance by coming up through the floor but this is Capital Fringe and budget doesn’t allow for it. It’s this kind of approach that makes Killer Quack more than another “Let me tell you what happened to me” type of show.

This show follows all the rules for a solo piece. When you have a story that is interesting and a performer who is animated and theatrical, it makes for a good time.

Killer Quack shows us the talents of James Judd, a remarkable solo artist with a story that keeps you interested the whole time. This one is well worth seeing.