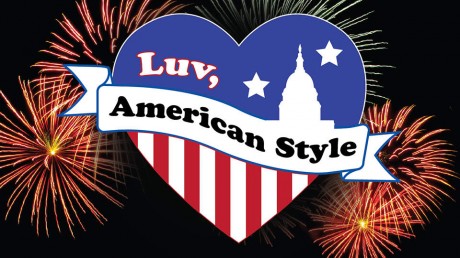 As a teenager, I was a huge fan of the TV show Love, American Style, an anthology-style sitcom that ran from 1969 to 1974. The show served up two or three mini stories of romance featuring popular actors of the era, interspersed with comic video shorts. At this year’s Capital Fringe, an updated, DC-centric version of the show is being presented by the Infinite Jest theater company with mixed results.

Kudos to the production team, notably Evan Heiter and Keegan Cassady, for replicating the opening and ending TV credits and introductions that were part of the original TV show. They have created these elements in video projected on one of the back walls as well as funny shorts presented in between the acts. It was also a wonderful surprise to see the original, classic commercial for Alka-Seltzer, “That’s a Spicy Meatball.” The theme song was covered by a local DC band called MUNDY and all the scenes were set in different DC locales around the city.

The production opened with A Date with a Stranger, written by Cherie Vogelstein and directed by George Grant. The scene is set in Johnny Rockets in Pentagon City where a man and a clearly schizophrenic woman meet for the first time and attempt to establish a relationship. Another man (Evan Crump) is sitting nearby reading a newspaper. Unfortunately, the comedy is lost as Kathryn Winkler as Paula and Klenn Harrigan as Clark appeared to have difficulty with their lines, lacked timing and were often hard to understand.

The third story, Mallory Square, by Christopher Demos Brown and again directed by George Grant, had the same issues. Also in this cast were Kathryn Winkler and Klenn Harrigan as a straight married couple, Jen and Andy, who are having dinner in the chic DC town home of their gay friends, Sean and Josh ( Evan Crump and Charles Lee). The gay couple wants to have a child and have a big favor to ask of their friends. Here again, the performances were awkward and uneven.

On the bright side were the second and last acts which benefitted from solid direction and brilliant actors. In Crazy Eights, written by David Lindsay-Abaire and directed by Stephen Jarrett, a lovable ex con, Connie (Jennifer Robinson) comes home to her DuPont Circle apartment to find her parole officer, Benny (Nello DeBlasio), waiting for her like an anxious mother. He has essentially broken into her apartment and even baked her a tomato and basil torte. It turns out Benny carries a torch for Connie who may or may not hide similar feelings. Benny’s jealousy is apparent when a friend, Cliff (Jorge Silva), comes over to play cards. All three actors gave tremendously engaging performances.

Nello DeBlasio and Jennifer Robison are teamed up again in the hilarious and delightful The Sure Thing from David Ives collection of one acts called All in the Timing. I saw The Fells Point Corner Theatre do this particular piece last year and loved it then. Betty and Bill are strangers who meet in a coffee shop in Adams Morgan and start a conversation. They don’t always get it right and a bell is rung offstage giving them a chance to start over and give the correct responses that will inevitably lead to a love match that is meant to be. DeBlasio and Robison have incredible chemistry and make Luv, American Style well worth seeing.