Fringe Review: ‘The 27 Club’ at Warehouse 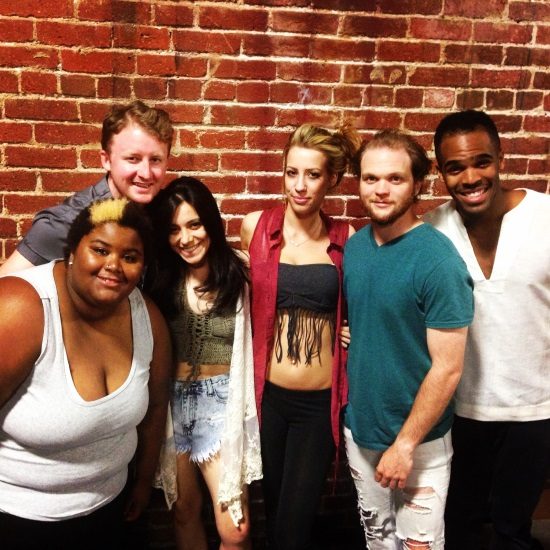 The names Janis Joplin, Amy Winehouse, Kurt Cobain, Jimi Hendrix, Brian Jones and Jim Morrison are synonymous with classic Rock ‘n’ Roll. They unfortunately all have something else in common. All of them died at age 27 from some kind of addiction.

Director/Writer Carolyn Agan has put together a piece that definitely deserves a future past Capital Fringe.

Writer/Director Carolyn Agan has taken the writings of these gone too soon talents and with the music that made them famous, has created what might be a top Capital Fringe pick for me this season called The 27 Club.

First off this is not a bio type of show. The six crazy talented performers are not supposed to be the actual singers. They are regular people who are celebrating them and what a celebration it is.

A few of the many musical standouts include Jade (where did this girl come from, please cast her more) Jones with a true knockout performance of Janis Joplin’s “Piece of my Heart.” Other tearing the roof off the place performances include the always energetic and intense Tina Ghandchilar with another Janis Joplin classic called “Mercedes Benz” and a lovely solo feature called “What is it About Men” made famous by Amy Winehouse. Then there is Kurt Boehm’s superb feature “Peace Frog” by The Doors and “Lithium” made famous by Kurt Cobain and performed beautifully by Ian Anthony Coleman. Paige Taylor and Alex Piper round out our fine bunch of performers.

The final song in the show called “28”  is written by John Craigie and while it was not written specifically for the piece itself, it sounds like it could have been. It puts the whole show in perspective as to what fame, drugs and alcohol can do to people and how addiction has wiped out some amazing talent.

You can’t have this kind of show without a good band that knows how to rock, and musical director Jake Null has assembled a real hip bunch of players. With Null on keyboard the other members are Jaime Ibacache (guitars), Jason Wilson (bass) and Manny Arciniega (drums).

Director/Writer Carolyn Agan has put together a piece that definitely deserves a future past Capital Fringe. It might show some others how to not just throw the music icons on stage and say “this is what happened to me.” The 27 Club proves that a jukebox musical can have substance and true heart to it. With performances and music from some of the best rockers ever, how can it not.

Running Time: 70 Minutes with no intermission.

The 27 Club plays through July 26, 2014 at the Warehouse – 645 New York Ave NW, Washington, DC. For performance information and to purchase tickets, click here.