Fringe Review: ‘The Duchess of Malfi’ at Flashpoint 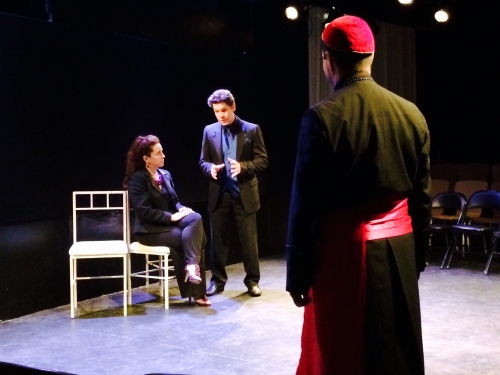 The phrase “Jacobean tragedy” may not inspire enthusiasm in modern theatergoers, but We Happy Few’s production of John Webster’s The Duchess of Malfi, directed admirably by Paul Reisman, proves that William Shakespeare was not the only timeless playwright to emerge from the early seventeenth century. Malfi has love, lust, intrigue, murder, and even some elements of an old B-movie horror film.

The Duchess of Malfi tells the story of the eponymous (and unnamed) Duchess (played by Lindsey D. Snyder), dominated by her two unscrupulous brothers, Ferdinand (Brit Herring) and the Cardinal (Matthew Pauli), who are aided by their spy Bosola (Rafael Untalan). While they are away from home, she falls in love with and marries her steward Antonio (Drew Kopas) under the eyes of her maidservant Cariola (Gwen Grastorf). By the end of the play, all of these characters will be dead, and more besides, but the whirling dance of deception and emotional turmoil is a privilege to watch, especially at the hands of such capable actors.

There is not much of a set–Malfi plays in a black box theatre, with audience seating on three sides. The action takes place in between the aisles, in the center, behind curtains and offstage, maintaining a frenetic pace and a sense of immediacy that makes the lack of scenery virtually irrelevant. There is a versatility to the set as well, much to the credit of sound designer Robert Pike and lighting designer Jason Aufden-Brinke–that bare black stage easily becomes a dinner party, a cell, and a moonlit garden.

This play may not have the immediate relevance of some of the more modern plays in this festival, but thematically it fits right in–this is a city where political intrigue thrives as much today as it did in Europe four hundred years ago. Duchess of Malfi is well written, well acted, and very well done.

The Duchess of Malfi runs through July 23, 2014 as part of the Capital Fringe Festival, at Flashpoint, 916 G St NW, Washington, DC. More information can be found online.