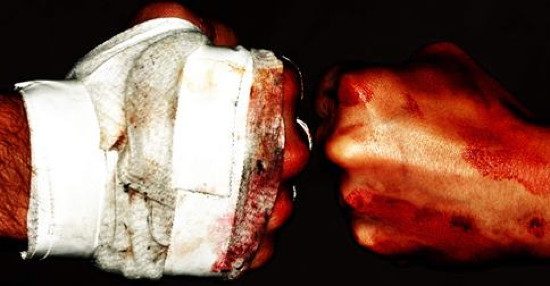 Live Action Theatre in partnership with Preferred Arms presents The Tournament as part of the Capital Fringe Festival.  Written by Kyle Encinas and directed by Lex Davis, The Tournament claims to be a martial arts extravaganza where, “Spirits with be tested. Blood will be spilt. Asses. Will. Be. Kicked.” All of the above is true, and then some!

In the events leading up to the tournament of the best extreme fighters in the world, we get to know the motivations behind why each character wants to compete in the tournament.  Jack Clotaire (played by a funny and well-muscled James Finley) wants to avenge his father’s death in the ring at an earlier tournament against champion fighter The Jackal (played by Craig Lawrence).  Valerie Kane (played by talented Kristen Pilgrim) wants the $50,000 prize to save her parents from bankruptcy.

For a good time – don’t miss ‘The Tournament’!

All the competitors in the tournament are chosen by The Well Dressed Man (Robb Hunter) and compete against each other until there is only one person left standing. Amusing musical dance numbers featuring the entire cast separate many of the scenes.  1980’s-style fighting inspirational music is used, such as “Eye of the Tiger,” and the cast is hilarious mixing dance steps with martial arts moves!

The ending will surprise you, and I am pretty sure you will cheer, tap your feet and sing along to the music.  For a good time – don’t miss The Tournament!