Fringe Review: ‘Walken in His Shoes’ at Redrum, Fort Fringe 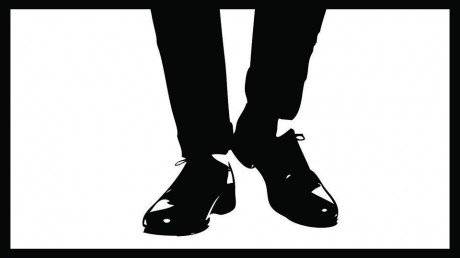 Unless you are an alien who just arrived from another planet, there is no question that Christopher Walken is one of our most hard-working, revered, quirky – and imitated – stage and screen actors. He is an Academy Award-winner for his performance in the 1978 The Deer Hunter as well as a Tony winner in 2010 for A Behanding in Spokane. While Walken is probably more associated for his darker film roles, he gained even more pop culture status with his various appearances as a host for Saturday Night Live, memorably as a not-so-smooth Casanova and as a record producer who demanded more cowbells during Blue Öyster Cult’s imagined recording session for “Don’t Fear the Reaper.” He was also featured in the music video for Flatboy Slim’s “Weapon of Choice,” displaying his dancing skills for a new generation. Most recently, Walken was one of the bright spots as mobster Gyp DeCarlo in Clint Eastwood’s film version of the successful stage musical, Jersey Boys, released this summer.

There are many funny moments in this production and its heart is in the right place. Even though the show is still rough around the edges, it is a work in progress that should definitely be seen.

Walken in His Shoes is written by Ruben Rosthenhausler and directed by Leah Rosthenhausler who pull double duty as actors in the production. (Ruben also wrote a tribute ballad to the actor.) The story revolves around an unlikely group of four men who are members of Christopher Walken Club of America. They meet every week to honor their hero by talking in “Walken-ese” (using the actor’s distinctive delivery), and discussing their efforts to erect a statue of Walken in Tucson, Arizona.

The play opens with a hysterical video (directed and edited by Luke Howell) where real people were approached on the street in Tucson and asked about their thoughts about erecting a Walken statue in their city. This sets the scene for the meeting of the club. Jerry Lipkin (Brandon Howell) is the nerdy and enthusiastic chairman. Spider Chavez (Ruben Rosthenhausler) is a Chicano with a colorful past and who uses many malapropisms. Hi Gronowski (Michael Howell) is a geeky, socially awkward computer guy who delivers bad (and many times unsuccessful) puns, and finally Spiders’ boyfriend, the flamboyant Preacher Sanders (Luke Howell).

Chris Ronald (Stephanie Howell) has come to the meeting in hopes of  being the first woman to be part of the group. Not everyone is convinced and it nearly causes a rift between the men. During the course of the meeting, they show a video of Spider and Preacher Sanders, who very inappropriately but proudly, introduce a group of kindergarten students to the work of Christopher Walken. The reaction of the teacher (Kate Scally) is priceless. But what the men are most excited about is the upcoming First Annual Christopher Walken “Beauty” Pageant.

The next scene is two months later and the big day for the pageant has arrived, complete with a contest that measures the height of their hair to that of Mr. Walken to a speech from each of the contestants. They also present a talent which includes Spider’s cowbell skills and a rock tribute to the actor sung by Jerry in a bad wig. The MC, Savannah Steele (Leah Rosthenhausler), has thrown in a ringer – her very young son, Jordan (Matt Howell) into the competition. The audience becomes a participant as a young girl (Sarah Rosthenhausler) holds up an APPLAUSE sign throughout the event. There are many great moments and wordplay though at times the forced attempts at humor by the Hi character go over like a lead balloon.

As you can see from the credits, this is a family affair for the Howells and Rosthenhauslers – and a labor of love. Parents/grandparents sell play T-shirts, posters and Christopher Walken fan club buttons in the lobby.

If you are at all familiar with the work of Christopher Walken, you will definitely “get it.” There are many funny moments in this production and its heart is in the right place. Even though the show is still rough around the edges, it is a work in progress that should definitely be seen.