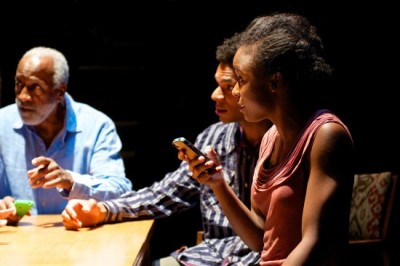 Willie C. Carpenter as “Clay” (l), Biko Eisen-Martin as “Jeremiah,” and and Kaliswa Brewster as “D” in The Ashes Under Gait City by Christina Anderson. CATF 2014. Photo by Seth Freeman.

There are shows where you get exactly what the program offers; the plot unfolds as promised, and the write-up for critics is as simple as can be.  Then there are the shows that go deeper, whose premise leads you into areas of the human psyche you hadn’t expected.  Christina Anderson’s The Ashes Under Gait City is such a show, a rewarding exploration of injustice, the need for change and recompense; but more importantly it is an examination of the complexities of group dynamics, and a study in how a righteous movement can easily devolve into cult.  Director Lucie Tiberghien has made great, creative use of the Marinoff Theater’s in-the-round space, and with a solid cast gives us a truly rewarding evening of thought-provoking drama.

Anderson’s story line is straightforward:  inspired by her own research into the history of racial exclusion laws in America’s Northwest, she imagines a now-decimated black community in the small, fictional Oregon town of Gait City, and one woman’s effort to reverse that community’s decline.  If that were all there was to it, the show would have all the promise of a hackneyed Hallmark Special; but what enriches The Ashes is Anderson’s awareness of how social networking sites have come to dominate so many people’s lives, how much we crave real person-to-person contact, and how vulnerable we are to both ideological and internet-based exploitation.

This production is a technical wonder.

The leader of the campaign to re-populate Gait City is an internet spiritual advisor Simone the Believer, who appears both on-stage and in a series of YouTube webcasts projected onto multiple screens set in banks in the Marinoff Theater’s in-the-round space.  Set designer Luciana Stecconi manages the rare feat of bringing us into the brave new world of the internet, with Simone’s webcasts seamlessly integrated with the action; these banks of screens also serve as displays for text messages, and the ability to watch both the message and the persons involved (and, more importantly, their emotional responses) is a highlight of the show.  Stecconi also accomplishes the neat trick of integrating the screens into a sort of stone cliff that the cast climbs at crucial points in the action, with nature and the Web competing for our attention.

Simone, high on the devotion (and the money) she has received over the years and certain that her followers will jump at the chance to join her, announces her move to Gait City on YouTube.  The town lost most of its black residents after a mysterious fire years ago, and she accuses Gait City of the crime of ‘disregard’ –i.e., of ignoring and denying the dignity of the black community there.  This being the age of instantaneous communication/affirmation, Simone gives her YouTube followers only 48 hours to upload videos in which they audition for a place in her new community.  Of course in internet terms, 48 hours is an eternity; but for actual human beings faced with a life-changing decision, the time frame is almost comically brief.

Daphne Gaines is sensational as Simone, and her charisma drives much of the action.  Accompanying Simone on her quest is “D” (played effectively here by Kalisha Brewster, who also has a star turn at the Festival in Charles Fuller’s One Night).  “D” has recently given up a professional career, a victim of the kind of ‘disregard’ that Simone is fighting against.  Together they descend on Gait City, and soon find themselves with a small circle of followers to share their vision.

Simone and “D” are joined by their landlord Felicia (Shauna Miles, who is equally effective in her multiple roles in One Night); Miles’ Felicia is a determined and even stubborn holdout in a neighborhood now overrun by gangs and drugs, and gaining her trust takes some doing.  Through a chance encounter at a tony local coffee shop, Jeremiah (a truly charismatic Biko Eisen-Martin) joins the crew, and the inner circle of Simone’s believers is filled out by Clay, a new arrival to Gait city and—it turns out—a huge fan of Simone’s online persona.  Willie C. Carpenter turns in a fine performance here as Clay, a refugee of gentrification forced to move constantly throughout his adult life, and a man desperately searching for an affordable, decent place to live (Carpenter’s performance in One Night is not to be missed either).

The plan to repopulate Gait City nearly falls apart when Simone’s followers appear slow to respond to her call for candidates; this sets in motion a scheme to generate headlines and online publicity by openly confronting the local white population.  This “plan B” works almost too well, and results in a confrontation that is both terrifying and all too real, given the temper of our times.

What is truly eerie about The Ashes, however, is the way that this tightly-knit group quickly devolves into a closed circle with a strict hierarchy and rules of procedure (Felicia even draws up a ‘Charter’ for all five to follow).  Simone also seeks to control the budding relationship that develops between “D” and Jeremiah, another signpost that is ignored because of the perceived urgency of the group’s quest.  Bit by bit these individuals fall in line, with Simone assuming greater control over the operation than perhaps even she envisioned at first.  And the final shocking image of an initiation ceremony for its newest member or ‘Complement’ (Tiffany Reneé Thompson) calls to mind the cults and fraternities that have plagued this country for years.

This production is a technical wonder, and is the most successful integration of new technology I have seen yet; it is a trail-blazer and a sign that theatre and the Web can have a fruitful partnership, and can reflect honestly on the virtues and limitations of the new media environment we live in.  At its heart, however, are people who have always been, and always will be, vulnerable to exploitation and extreme behavior even in the worthiest cause.

The Ashes Under Gait City runs through August 3, 2014 in the Marinoff Theater Drive at Shepherd University in Shepherdstown, West Virginia.