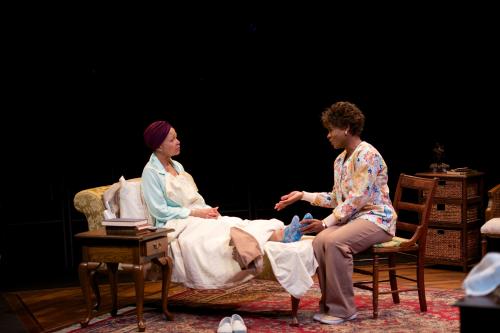 If you are looking for an exhilarating, raucous, hilarious, roller-coaster ride of a show, a genuine gem from start to finish, you must drop whatever you’re doing and run to see Chisa Hutchinson’s Dead and Breathing.

Forget the speed cameras—you can pay The Man later.

To say that Hutchinson has some comedic chops is like saying Steven Strasburg has a little speed on that fastball.  A veteran writer for both the Blue Man Group and the New York branch of the Neo-Futurists (whose anarchic, constantly changing play cycle Too Much Light Makes the Baby Go Blind has been a hit for years), Hutchinson has developed an unerring sense for dialogue and timing, not to mention a wicked taste in plot twists.  The show will leave you in stitches.

Oh, and she will make you cry, too.  Buckets.  When was the last time a play made you do all that in the space of an hour and a half?

…not to be missed.

The action takes place in the upscale residence of Carolyn, an African-American widow diagnosed with terminal cancer, and the play begins as her Hospice caregiver, Veronika (yes, with a “k”), is giving her a morning bath and tending to Carolyn’s bodily needs.  When Veronika is called to answer the door, Carolyn steps uneasily out of the tub, we are treated to a comic ballet as she tries unsuccessfully to do herself in.  The gags are priceless; apparently Carolyn has been trying to kill herself for so long that when Veronika returns she’s hardly phased at all.

Director Kristin Horton has made the bold choice to stage this day-in-the-life scene completely in the round, which gives the actors and audience nowhere to hide even as Carolyn is bathed and ushered in and out of the bathroom.   So yes, there is nudity; but it’s the normal, getting-out-of-the-tub kind which invites audience members to respectfully avert their gaze.  After all it’s the artists we’ve come to see, not the lady parts.

And the artists here are phenomenal, not to be missed.  What’s more, Hutchinson calls for this intimate morning scene for a reason:  it heightens the intensity of the drama’s pivotal revelation.  Without this sequence in the audience’s collective memory, the main plot twist would not have nearly the visceral impact that it does.

Lizan Mitchell tears up the stage as Carolyn, giving us a bitter, cynical, strong-willed woman whose vulnerability is there, but buried layers deep.  Carolyn’s demand for a quick end to her misery is at the center of the play’s argument, and she sets off a high-stakes battle of wits with her Jesus-loving, Life-is-Sacred caregiver, trying every trick in the book to con Veronika into helping her die.

Matching her word for word, step by step, is N. L. Graham as Veronika.  Graham’s Veronika is as earthy and lusty as she is Christian, and as the drama unfolds the depth of her pride and religious commitment acquires an entirely new meaning.  Veronika’s final confrontation with Carolyn offers one of those stunning revelations that, for me, are what the stage is meant for, it’s why we brave the boards night after night; it’s why I keep coming back.  It’s a career-making role that Graham has made her own, and her performance is a real gift.

Luciana Stecconi has created a finely appointed upper-class home, right down to the tasteful claw-foot tub and the upholstered daybed where Carolyn reigns supreme.  Eric Shimelonis provides the discreet ambient sounds of Carolyn’s favorite talk shows, and—although I have no fashion sense whatsoever, being a jeans-and-t-shirt type myself—Trevor Bowen has given Graham a fine ensemble, which combines the practicality and fashion sense of Veronika’s character.

While you’re in Shepherdstown, West Virginia, be sure to treat yourself to several of the shows that the Contemporary American Theater Festival has to offer.  The production values here are high, and well worth the drive.  But whatever you do, be sure to make your reservation now for Dead and Breathing; it is the highlight of the Summer, and not to be missed.

Dead and Breathing runs through August 3, 2015 at the Marinoff Theater at Shepherd University in Shepherdstown, West Virginia.