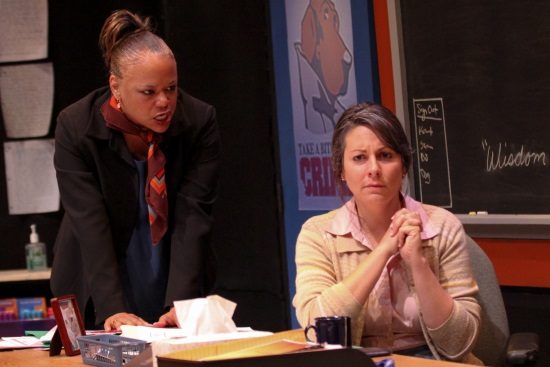 Any play that deals with a hot topic like bullying in school is likely to get a lot of attention from theatre companies across the country. Gidion’s Knot by Johnna Adams is one of those shows and is currently being presented by Forum Theatre in Silver Spring as a co-production with Next Stop Theatre Company in Herndon. It has had previous productions in Houston, NYC and elsewhere.

Carkuff paints the portrait of a conflicted teacher with a fine performance.

We enter Heather Clark’s (Katy Carkuff) Chicago suburb fifth grade classroom to find a tense and upset about something teacher. College professor Corryn Fell (Caroline Stefanie Clay) has come to the school for a teacher conference about her son Gidion who was recently suspended for writing a very long inappropriate essay that makes some pretty horrific accusations. Gidion was made fun of by many of the students except one girl who really liked him. Gidion went home and committed suicide by shooting himself. Clark is surprised that Fell even bothered to come for the conference and actually had taken the appointment out of her book. Fell wants answers and Clark would prefer not to talk about this situation without the principal present. The principal is supposedly coming in special from taking a personnel day. There is also a supposed parallel with what the teacher is so upset about and what has happened to Gidion’s mom. I’m not saying what it is but might throw you in a way you don’t want.

I have several issues with this production as a whole. First off is the scenario Adams presents. There are just too many implausible things in her script for me to buy the premise, including the teacher even engaging in a conversation with the mom without legal counsel present. With the situation as serious as it is, the teacher would want to be as careful as possible. She has only been teaching for two years so it could conceivably cost her her job.

My second issue is in one half of the acting. Caroline Stefanie Clay plays Corryn Fell all at one level. Yes the mother is upset and wants answers and the teacher is no help but it’s very hard to feel sorry for the mom’s loss when the performance is all one note.

Katy Carkuff as teacher Heather Clark fares considerably better. Her big moment when she reads Gidion’s offending essay does hold your and her performance throughout is considerably more contained. Carkuff paints the portrait of a conflicted teacher with a fine performance.

Director Cristina Alicea has paced the show a tad too briskly for my taste. It feels like the conflict could have been building a little more gradual between the two characters and some needed moments for pauses were not taken.

Overall Gidion’s Knot did not have the tight grip on me that I wanted it to have.

Running time: 70 minutes with no intermission.

Gidion’s Knot runs through August 3, 2014 at Forum Theatre, 8641 Colesville Rd, Silver Spring, MD. For tickets click here. The production will then play at Next Stop Theatre Company in Herndon VA, from August 28th through September 14, 2014. Tickets for that engagement can be purchased by clicking here.