Theatre Review: ‘I do! I do!’ at Infinity Theatre Company 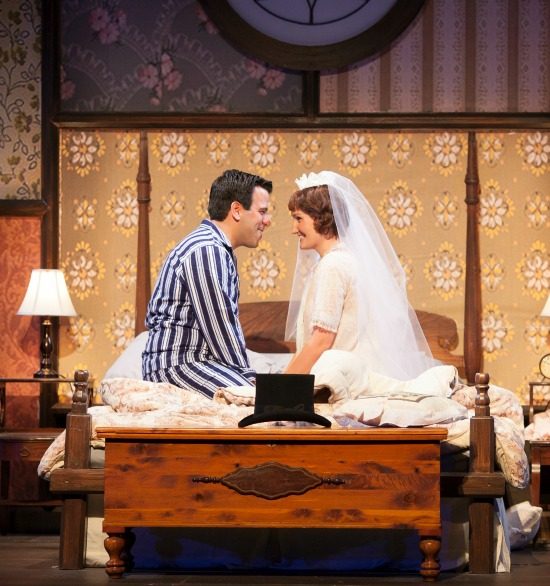 I do! I do! is a musical medley about marital bliss, marital strife, and marital longevity. Co-Producing Artistic Directors Alan and Anna Ostroff of Infinity Theatre Company create another wonderful production. Directed by Tina Marie Casamento and David Libby as Music Director, the original book and lyrics are by Tom Jones and music is by Harvey Schmidt.

Starring Daniella Dalli as Agnes and Craig Laurie as Michael, the initial impression is these two singer/actor/dancers do just that for the duration of the two hour show. The opening has Agnes and Michael, dressed as bride and groom, entering from either side of the auditorium, singing the opening “I do! I do!” and wondering if they shouldn’t. The stage is layered with a house-shaped framed, a bed, and back-lit by a stained glass window that represents a church. After Michael and Agnes married the church reverts to their bedroom.

The wedding night “Michael’s Change (Michael Gets Undressed)” is quite hilarious as he stumbles to get his pants off and his shirt as well, as the buttoned cuffs won’t come off his wrists. Eventually, he emerges wearing striped pajamas and a night cap. A surprised Agnes confesses she has never seen an undressed man. Michael admits the same yet they eventually experience marital bliss on their wedding night as he sings, “I love My Wife.” This is a playful soft-shoe number that validates their cutesy love for one another.

As one can guess in “Something Has Happened,” Agnes reveals she is pregnant. In “My Cup Runneth Over,” Michael feels ignored because of the pregnancy yet Agnes feels she has the most wonderful husband in the world.

All too soon, in “Love Isn’t Everything” Dalli and Laurie sing of the expense of raising a child and ask, “Where does it all go” In this number, Agnes takes care of all the household chores, while Michael decides to play around. Laurie really hams it up in this scene until guess what? Agnes is going to have a girl.

Laurie delivers a heart-felt monologue about Michael as a writer as it leads into “Nobody’s Perfect.” While dressing for a formal occasion, they start needling each other about their long lists of irritating habits: “she’s late, he’s early…” and her spending all his royalty checks has them overdrawn – again. Their argument escalates and continues when they return from their evening. In the heat of their argument Michael says to Agnes, “If you don’t want to play second fiddle – then leave the orchestra or form one of your own.” Ouch!

It is “A Well Known Fact” that “men of 40 go to town, woman go to pot,” as Michael proclaims men get more and more attractive and she likes to shop.” And Agnes does as she puts on her pearls, her Spanish shawl, and $85 hat. “She’s going to pot – she’s going to be HOT!” Dalli really sizzles in “Flaming Agnes” as her formal outfit sparkles then she takes off her hat and literally let’s her hair down. Bravely she shimmy and shakes around on the railing (in their bedroom) and does it in a tasteful style.

“The Honeymoon Is Over” is disheartening as Michael and Agnes argue over his cheating. Their anger is incredibly intense as Dalli and Laurie’s chemistry shifts from cute and funny to hurt and angry. But as Agnes packs to move out, Michael has a change of heart, begging Agnes not to leave. They kiss and make up.

Act II begins with New Year’s Eve 16 years later as Michael and Agnes ponder where did the time go, in “Entr’acte” and “Where Are The Snows?” Their relationship has returned to a lovable state as they dance a lovely waltz while waiting up for their son to return home from a New Year’s Eve party. They discover their son has tricked them. Now Agnes and Michael just hoping for “When The Kids Get Married” so they can fulfill their wish list. Dalli is very funny as she tries to play the violin only to screech the bow against the strings.

Soon their dream comes true as their daughter is marrying – an idiot – a nincompoop! Great word! “The Father of the Bride” is epitome of humor as Laurie truly demonstrates his sing talents. Now that Agnes and Michael are empty-nesters and she questions who she is and that being a woman can be so lonely in “What Is A Woman?” Again Agnes wants to leave and he again begs her to stay. He can’t write nor live without her as he gives her gifts that are of his liking.

“Someone Needs Me” is a very touching as they slow dance and are having fun again. The aging costume change on stage is brilliant as it brings Agnes and Michael full-circle. “This House” has been a very good house filled with life and love. Updating this production from turn of the 20th Century to 1956 to present was a wise decision that will make anyone smile.

I do! I do! is a dandy production that will make audiences laugh, cry, and laugh again through the good, the bad, and the ugly of marital life. Dalli and Laurie are true entertainers as Agnes and Michael.