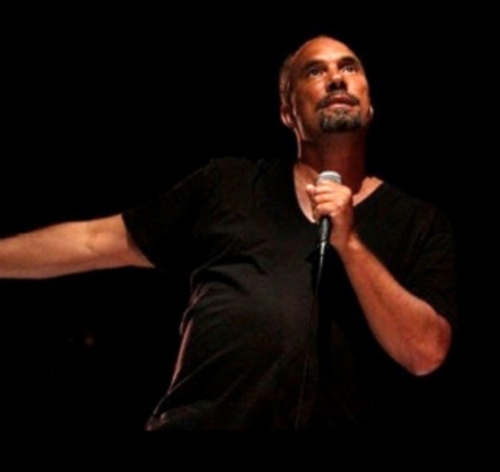 On March 3, 1991, a Los Angeles construction worker was beaten with police batons over 50 times by local police. A year later, the acquittals of all four police officers would spark the 1992 LA Riots, and the name of Rodney King would become synonymous with anger, destruction, and chaos–even as he pleaded for peace.

‘Rodney King’ is a thoughtful, provocative piece, at times shocking and sorrowful.

Roger Guenveur Smith’s moving and startling one-man show, now playing at Woolly Mammoth Theater, is a fascinating insight into the events that turned Rodney King into a household name. King was less than a month from his twenty-sixth birthday when he was caught speeding down a California freeway, and then beaten a reported 56 times with police batons. Smith refers to him as the “first reality TV star;” the police’s brutal assault was caught on camera and broadcast repeatedly on television news. More than twenty years later, King would be found dead, lying at the bottom of his swimming pool.

This show has no props–merely a beige square on a bare stage, and a man (Smith), standing barefoot with a microphone. Smith declaims his narrative in a fluid, almost hypnotic rhythm, reciting snippets of rap music, internet comments, and quotes from King himself. In one dark moment, he stands in shadow and reproduces Rodney King’s confused, impassioned plea to the rioters: “Can we all get along?”

This is not a reenactment. It is a reflection–on the nature of public and private lives, of personal responsibility, and the singularity of human life. Rodney King’s private suffering was made a public event through the use of a video camera, and that notoriety put him at the center of a conflict in which he had no interest–he became a symbol of the oppressed, the racial divide, and of the riots that he wanted nothing to do with. The sheer simplicity of Smith’s staging, his improvised conversation with the audience and with the dead King, serves to highlight in stark contrast the complex circumstances that surrounded Rodney King’s life.

Rodney King is a thoughtful, provocative piece, at times shocking and sorrowful. The power of live theatre creates a kind of intimate understanding that was not possible from the viewer side of a television set, watching King beg the riots to stop. Rodney King was in our living rooms, but not in our heads.