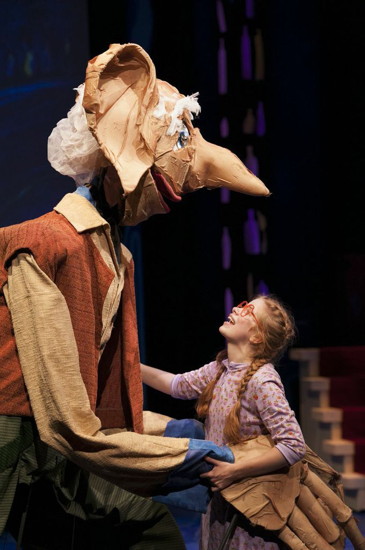 Imagination Stage brings another Roald Dahl story to the stage!  This summer it is The BFG, a classic children’s story about a big friendly giant (or BFG), a young orphan girl and the Queen of England. Co-directed by Kathryn Chase Bryer and Eric J. Van Wyk, and with the extraordinary lofty puppets designed by Eric J. Van Wyk, The Big Friendly Giant captures the hearts in the audience as easily as he catches dreams.

The Big Friendly Giant’s job is to collect the good dreams young children in his colorful dream jars then give them to other children while they are sleeping. One night Sophie, the young orphan girl, sees BFG spreading the good dreams. Surprised at being spotted, he grabs Sophie and takes her back to the land of giants. Sophie soon learns that her giant is one of many but that her giant is the only one who doesn’t eat humans.  Also, her giant (who is said to be 24-feet-tall) is the smallest, as all others giants are twice a tall!

After Sophie secretly sees the other giants and realizes how truly awful they are, she devises a plan to visit the Queen of England in order to inform her of these giants and to ask for her aid in stopping them from eating children.  Sophie’s journey is filled with excitement and charm.  This is my favorite Dahl story because of the many gentle ways he writes about important life morals. One such lesson is that what is inside is more significant that what is on the outside. Another is that just because you might be small and/or young doesn’t mean you can’t change the world.

That’s the charming story, but Eric J. Van Wyk adds wonder to this production with his Bunraku style puppets. Bunraku is a Japanese style of puppets that are operated by puppeteers covered in black while moving the puppet’s arms and legs with their hands.  Van Wyk’s BFG is about 24 feet tall  and, at most times, has 4 puppeteers working his arms and legs.  The lone actor (James Konicek) wears a backpack-like structure that supports the body and the head and has working levers and gears that operate all facial movement.  Konicek initiates all of BFG’s movement and voice, and it is his performance that brings most of the magic.

…The Big Friendly Giant captures the hearts in the audience as easily as he catches dreams.

Megan Graves plays Sophie, and Graves’ Sophie is adorable, feisty and determined to save the world.  Her interactions with The BFG and the other giants are so completely believable and natural that I easily lost site of the operators working the puppet and just saw a big giant.  Susan Lynskey as the Queen of England is very funny with her constant royal wave and British accent.  The entire cast does an amazing job bringing each puppet to life, from the giant’s unusual language to the need to eat “human beans.”

Van Wyk says in his directors’ notes that “The unique use of puppetry, and seeing these larger than life characters moving and breathing in this production, allow the audience to identify with Sophie and share her sense of awe and amazement.”  I complete agree with him.

Running Time: Approximately, one hour with no intermission.