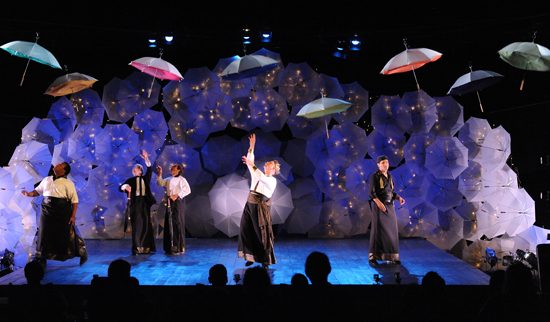 King Alonso (Ian LeValley – center) and his men are amazed by the magic they encounter on the island. Photo: Stan Barouh.

It was one of those rare, cool evenings that this area has been enjoying this summer – and a perfect night to see the enchanting production of Shakespeare’s The Tempest performed under the stars on the Olney Theatre Center’s Root Family Stage. Olney is now in it’s 76th season and also the 65th consecutive year of touring by the National Players. The talented cast is comprised of current members as well as former veterans of the company.

The cast does a wonderful job across the board in the telling of this tale while the production team creates a visual feast…making it accessible, fun and a delight for the entire family.

The play is directed by associate director/director of education for Olney, Jason King Jones. He has brought his amazing vision to life with the help of a top-notch creative team. The stunning set design from Charlie Calvert cleverly utilizes umbrellas as the backdrop (as well as props) – the perfect symbol for this stormy play about love, revenge, redemption and forgiveness on a magic isle. Designer Sonya Dowhaluk does a breathtaking job of lighting the production as the sun slowly disappears behind the huge trees that are the natural surroundings of the site. Costume designer Pei Lee has created the rich and ethereal costumes with beautiful touches throughout.

Years ago, Prospero (Craig Wallace), the rightful duke of Milan, along with his baby daughter, Miranda (Leah Filley), were stranded on an island as a result of a coup by his ambitious, evil brother, Antonio (Paul Morella) with the help of Alonso, King of Naples (Ian LeValley). Twelve years have passed and Prospero has raised his beloved daughter and acquired great magical powers. His enchantments are facilitated by Ariel (Julie-Ann Elliott), a fairy-like creature of the island. She has been his indentured servant ever since he saved her from imprisonment by a witch.

Miranda has grown into a young woman who has never set eyes on another man. This all changes when Prospero whips up a storm that causes the shipwreck of a boat carrying his nemeses, Antonio and Alonso, and their entourage including Alonso’s brother Sebastian (Christopher Richardson), Adrian (Adam Turck) and the wise, elderly advisor Gonzalo (Alan Wade). It was Gonzalo who made sure that Prospero and Miranda survived by supplying them with provisions when their enemies set them adrift.

Prospero has deliberately separated Ferdinand (Alexander Korman), Alonso’s son, from the rest of the castaways on another part of the island in hopes of not only creating a love (and political) match between his daughter and Ferdinand, but to exact revenge on Antonio and Alonso. Alonso and Ferdinand both believe that the other has perished. Antonio is still up to his evil ways and he attempts to convince Sebastian to kill his brother Alonso.

Shakespeare must always have his comic relief and here they are in the form of a trio of characters. The first is Caliban (Ryan Mitchell), a blue-barnacled half-human, half-sea monster – a native of the island who is kept in chains by Prospero because of his inappropriate advances toward Miranda. The butler, Stephano (Dan Van Why) and court jester costumed as a mime, Trinculo (Jacob Mundell) had been passengers on board the ship. Stephano and Trinculo free the creature and as the three get drunk together, they plot a foolhardy plan to overthrow Prospero.

All’s well in the end of course, as Prospero forgives his enemies, frees Ariel and blesses the union of his daughter to Ferdinand. He promises to give up his powers and return to Milan.

The cast does a wonderful job across the board in the telling of this tale while the production team creates a visual feast. This Tempest has a lighter touch than darker productions that have been presented making it accessible, fun and a delight for the entire family.

Running Time: Two hours and 10 minutes including one intermission.

Advisory: Recommended for ages 8 and up.