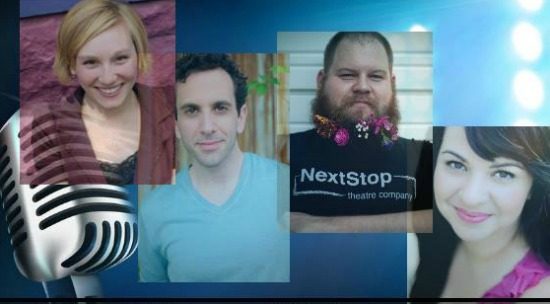 Who doesn’t like a musical revue? Its like going to a buffet, where you can choose the stuff that suits your tastes. You might get a surprise. And if one serving is not to your liking, another dish is served up right away. No need to wade through all of that messy exposition and denouement. You know–Boy meets Girl, Boy loses Girl, Boy poisons pigeons… (more on that later).

… an excuse to hear some great tunes.

NextStop is the new incarnation of Elden Street Players, that bastion of quality theatre who has reorganized and moved into the professional realm—making them unique in the Herndon-Dulles corridor of Virginia.

The most recent in the NextStop Summer Cabaret Series that I took in was the­­­­ enjoyable The Elden Street Players Musical Experience. It was a fun look back to musicals that the group has produced in their 26 year history, but really an excuse to hear some great tunes.

The evening’s talent consisted of ESP/Nextstop regulars Priscilla Cuellar, John Loughney, Jaclyn Young and Matthew Thompson. Their comfortable breezy style led us down memory lane in several notable moments. Cuellar, an expressive mezzo, shone in “Someone Else’s Story” from Chess. Loughney showed an easy style and harmonized nicely with Young in the offbeat “Tango Maureen“ from Rent. Young, a delicate blonde, played against type in the well received “Touch-a Touch-a” from Rocky Horror.

The imposing and bearded Thompson, who visually is not your usual cabaret singer, gave a fine rendition of “The Impossible Dream“ from Man of La Mancha, pacing the song to an effective crescendo. Counter to that is his nuanced performance of the offbeat gigglefest “Poisoning Pigeons in the Park“ from Tom Lehrer’s Tomfoolery.

My personal favorite was the foursome’s handling of the moving “Louder than Words“ from Tick Tick Boom. The words still reverberate–

“Cages or wings
Which do you prefer?
Ask the birds
Fear or love, baby?”

Under the musical direction and accompaniment of Elisa Altman Rosman, the single piano gave the voices center stage, though a touch of bass could have been used.

This upcoming weekend will feature the final two Cabaret Nites for the summer. Friday August 15th features Andre Enceneat for an evening of jazz standards.

Saturday, August 16, and Sunday, August 17th, the series ends with Jim Van Slyke, a Grammy nominated Singer/Songwriter and recording artist himself, who closes the series with his critically acclaimed Sedaka Show.

Running Time: 60 minutes without an intermission.

Summer Cabaret Series is presented by the NextStop Theatre Company (previously Elden Street Players) at 269 Sunset Park Drive,  Herndon VA, from July 11 to August 17th  2014. For tickets to other performances in the 2014 season, call the information line at (703) 481-5930 or visit online.