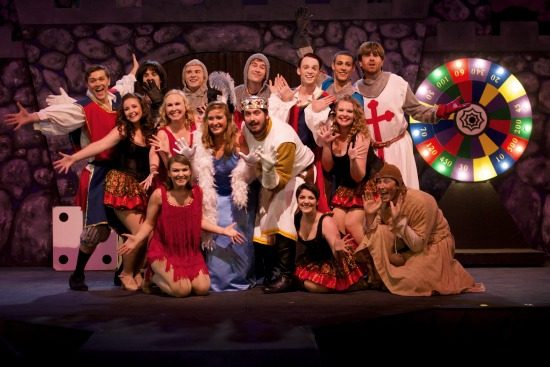 Yet another brilliant musical production that wows with its skillfully designed set, brightly-colored costumes, and an extraordinary cast that clearly loves their craft, is Annapolis Summer Garden Theatre’s current production of Monty Python’s Spamalot. Directed by Jeffery Lesniak, Music Director is Steven Przybylski and Choreography is by Rikki Howie, along with the cast and crew, will having patrons ROFL (rolling on the floor laughing).

“Lovingly ripped off from the 1975 film Monty Python and the Holy Grail,” Spamalot retells the tale of King Arthur and his Knights of the Round Table about their pursuit of the Holy Grail that brings the King and his entourage to an enchanted land called Broadway.

…it is a laugh-out-loud production with a stellar cast that ends up being a beautiful summer night of fantastic and flawless fun!

As the lights go down and the show begins, an announcer says with a fun Cockney accent, “Let your cellphones and pagers ring willy-nilly and please take as many photographs as you want, record, tweet…” And as the audience responded with a laughter-laced, “Really?” the announcer returned with, “Ah no, not really,” and giggles fill the air, setting the tone for a fun-filled evening under the stars.

Out steps the Historian (Austin Heemstra) who delivers commentary with acute annunciation and comedic flare. This rolls into the opening number performed by the Historian, the Mayor (DJ Wojciehowski), and the Villagers (ensemble) entitled “Fisch Schlapping Song” (aka fish slapping song). It’s a hilarious number filled with clogging-type dancing and slap-stick that is pure entertainment. Wojciehowski doubles as Dennis who barely takes a breath as he articulates his run-on sentences.

Enter King Arthur (Ruben Vellekoop) and Patsy (Steven Baird), King Arthur’s trusty servant/steed and constant companion. Both Vellekoop and Baird play off of each other and are endlessly amusing throughout the show. What is also constant is the clappity-clap of two coconuts (by Patsy) to emulate the sound of King Arthur’s horse – and it never loses its silliness. Moreover, Vellekoop and Baird harmoniously blend their vocal styles in “King Arthur’s Song” and “I’m All Alone,” that is sure to please. Baird also doubles as Guard 2.

Absurdity ensues with, “I Am Not Dead Yet,” performed by Not Dead Fred (Austin Heemstra), Sir Lancelot (Joshua Mooney), Sir Robin (Fred Fletcher-Jackson) and “dead” bodies as a plague has hit the village. This song sounds like it has been sung a few hundred times in Irish pubs and the jig-like dancing by this ensemble is to be commended.

“Come With Me,” performed by The Lady of the Lake (Alice Goldberg), King Arthur, and the Laker Girls (Jenna Bouma, Carlotta Capuano, Kara Leonard, Tabitha Thornhill, and Andy Wojciehowski), is full of glitz and glamour. Goldberg has a stunning voice that is as dazzling as her Lady of the Lake costume, a shimmering baby blue ball gown embellished with rhinestones and a boa.

Goldberg teams with Vellekoop in their duet “The Song That Goes Like This” (reprise), and it is like they have been singing together forever. In the “The Diva’s Lament,” Goldberg not only demonstrates her magnificent musical talents, she is witty and vivacious as well. Additionally, the Laker Girls give a cheer full of enthusiasm that is equal to any profession team on “any given Sunday.” These gals are rich with talent as they sing, dance, and impressively change costumes in seconds.

“Knights of the Round Table” bring together Lady of the Lake, King Arthur, Patsy, the Camelot Dancers, and the Knights to include Sir Bedevere (Wojciehowski) and Sir Galahad (David Merrill) in a Vegas-like production, highlighted with spectacular scat/blue singing. Wojciehowski also fills the roles of Dennis’ Mother and Concorde while Merrill is the Black Knight and Prince Herbert’s Father.

The top-notch numbers, “Find Your Grail” and “Always Look on the Bright Side of Life” really drive home a joint message of finding and fulfilling one’s own dream, plus no matter how bad life gets, it is all about the laughter – and this show generates just that.

The French Castle scene and the song “Run Away” is a cornucopia of French clichés from the scantily dressed maid to the French Guard (Thomas Peter) who speaks with a rather raspy French accident.

In other roles, Heemstra plays the Minstrel but truly stands out in his role as Prince Herbert. His comedic timing seems so effortless right along with his slap-stick abilities. Mooney takes on the roles of the French Taunter, Knight of Ni and is just so ridiculous as Tim the Enchanter that he’s absolutely one of the funniest characters.

A fire and brimstone sorcerer, Tim the Enchanter tries to be scary but doesn’t even make King Arthur and his knights flinch as they pursue the Holy Grail. Fletcher-Jackson also performs in the role of Guard 1 and Brother Maynard. Ethan Goldberg takes on the role of Sir Bors. Additional male ensemble includes Nicholas Carter, Rob Glass, and Wendell Holland. These young men are blessed with talent and are just fun to watch them romp around in these roles. Sir-Not-Appearing-In-The-Show is not played by Rob Glass and since he didn’t appear it the show, his performance cannot be critiqued.

Costume Designer/Coordinator Linda Swann creates brightly colored ensembles that adhere to the medieval time period. The men wore long tunics and tights with black leather boots and gloves. Some male cast members wore tunic overlays with bright red crosses. The female cast shimmered and shined in both their Laker costumes in shades of blue, while their “Vegas” costumes were red and black. King Arthur wore a bejeweled crown throughout the performance.

There are not enough adjectives in the English language to describe Monty Python’s Spamalot. Plain and simple it is a laugh-out-loud production with a stellar cast that ends up being a beautiful summer night of fantastic and flawless fun!