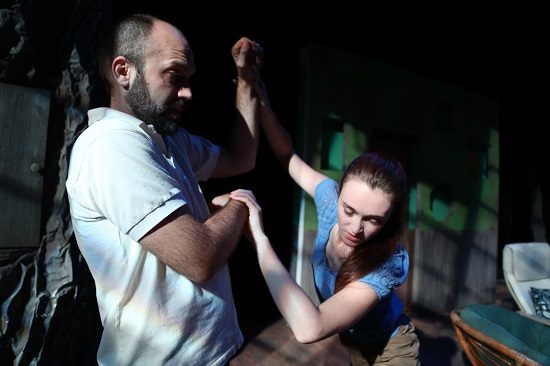 The audience, alas, at least those who are not privy to the inner workings of the play’s development, are the outsiders here, and whatever self-referential logic underlies the play, in my view, remains apparent only to those inside this hermetically sealed production.

Despite the fine performances of the play’s 8-member cast and the pleasing production values from its design team, Pol Pot & Associates, LLP’s narrative is a confounding jumble of ideological argument and otherworldly magic leading to a bleak, seemingly nihilistic conclusion.

The plot—at least that of the actions revealed onstage—concerns a 6-man group of 2 lawyers and 4 non-lawyers, all once affiliated with the same law firm, who decide to exit the rat race, go off the grid, and establish a communitarian, egalitarian brotherhood in an abandoned rental property in a forest somewhere.  There is a de facto if not de jure leader: Frog–whom someone dubs “the father”–who was a managing partner at the firm and less selfless than he would have his brethren believe.  There is a right-hand man, Raven, dubbed “the mother,” who was a mere partner at the firm.  There is a chief operating officer of sorts, Hector (or “Hectare”) the former office manager of the firm.  And there are three other members as well who inhabit non-language-based professions: Todd, the New Age acupuncturist, Mal  the mechanic, and Fiver, the one-time, seemingly “special needs” copy boy at the firm.  None are married; none have children; and all are sufficiently disaffected with mainstream society to leave it, take new names from nature, and retreat to their brotherly abode in the woods.  Interesting folks, all, and nice enough guys even if the leader of this leaderless community is a bit controlling after all, and the tension between the knowledge workers and the craftsmen flares up every so often (especially between Frog and the mechanic Mal, short for “Animal”).

… the cast of Pol Pot all gave authentic, engaging performances, and the ensemble work between them felt refreshingly real.

And indeed, there is much fluid, erudite talk about the nature of social organization and how between the ideal and the reality falls this shadow or that. Robust, meaty content to be sure, if only the discourse were not diluted by capricious splinterings of the “real” with the “unreal.”

Into this maintaining, if not perfectly harmonized, egalitarian community comes a young woman who, while trespassing on their property, steps into a fence post hole and sprains her ankle.  Someone finds her and brings her into the house, and the lawyers in the bunch fall all over themselves trying to avoid any treatments that might be actionable in our litigious society.  Only Fiver, the supposedly simple-minded, innocent young man, offers her pure, compassionate attention.  Like a folk tale filled with strangers met along the road who are not whom they appear to be, the girl’s arrival releases a sort of supernatural, ominous forest spirit who foretells of the group’s coming demise.

And true enough, the girl–and presumably her father (who is alternately also the landlord, the cop, and a previous client of both the acupuncturist and the mechanic)—sues the group (over the fence post hole), and the heavy hand of the law begins to descend upon this idealistic 6-man community.  Then, cryptically, the girl is apparently shot and killed in cold blood offstage sometime after the lawsuit has been filed (even though her still-warm body magically appears later in the group’s kitchen.) The detective arrives to question each member of the household, one of whom is the killer. The murder further undermines the collective’s relative equilibrium.

At the beginning of Act 2 of this 2 ½ hour play, the reason for its title is finally introduced.  The implication is made that the group’s eccentric and slightly controlling instigator Frog and Pol Pot, the monstrous leader of the Communist Khmer Rouge and scourge of the Cambodian genocide 35 years ago this year, are identical.   And the play, through a series of clever, erudite word plays, begins to liken the flawed idealistic leader of these social drop outs—and presumably the group’s egalitarian aspirations–to the horror of the Khmer Rouge.

There’s some kind of unwritten rule, at least in industrialized Western culture as I know it, about how much time must pass before a historical event or figure can be acceptably reduced to cultural or historical shorthand and tossed about with abandon.  We blithely now reference the Plague, the Dark Ages, the Crusades or Inquisition, the Salem Witch Trials or Attila the Hun or Ivan the Terrible or any number of other extreme villains.  The victims of their atrocities are long, long dead, and their ancestors faded into mere traces of DNA.  The same cannot be said of traumas, however, whose survivors still remember, whose descendants still mourn, and whose geopolitical shocks still reverberate.  The Holocaust, the slaughter of indigenous peoples, the Vietnam War, Stalinism, the list is long and growing, and the genocide of the Khmer Rouge is most decidedly among the bloody chapters of human history still too raw to reduce to a flip intellectual referent.

By what convoluted logic does playwright Ackerley compare a handful of imperfect but mostly nice guys in a forest striving for an alternative reality to the carnage of one of the most horrific genocides in human history?  The play and its facile word play seems, more than anything, to be a kind of thought experiment, a John Fowlesian mind game between the playwright and the audience about the folly of idealism, of egalitarianism, of communism or collectivism or perhaps even brotherhood as a social construct. On the plus side, the cast of Pol Pot all gave authentic, engaging performances, and the ensemble work between them felt refreshingly real.  As Frog, Michael Glenn infused a kind of dazed, dreamy, hyper-intellectual intensity that must surely have distinguished his character academically his entire life.  As Raven, the mellower, more beta lawyer, Chris Davenport brought a welcome easy competence and calm to the role and to the dynamics on stage. Michael John Casey as Hector, the über efficient, go-to guy for getting things done, embodied a clear-eyed pragmatism; his presentation of his research into potential community members was particularly well done and revealing.  As Todd, the New Age acupuncturist whom someone described as always having one foot out the door, Daniel Corey brought a surprising fidelity hidden beneath a surface nonchalance and measured investment in the community’s ideals.

Daniel Vito Siefring as the mechanic Mal, the community’s contrarian, brought an earthy skepticism and pugnacity to the stage.  In one of the play’s most explicable moments, he confesses that, while he doesn’t trust communities in general, he nonetheless yearns for a community of non-communitarians to commiserate with.  And as Fiver, the group’s innocent, all-is-not-what-it-seems, Tarot-card-reading copy boy, Séamus Miller infused an earnest wisdom and welcome integrity.  He believably captures Fiver’s reticence and tentative posture.

Kira Burri plays the mysterious young woman and litigant with an appropriate strangeness, contorting her face and body in the ominous interludes between the foreground “reality” and ethereal nether regions of foretelling in her early scenes. Her role, however, seems more device than full character, though what exactly the character symbolizes was hard to discern: the oppressive litigiousness of contemporary US society: the disruptive pull of the feminine among a sea of maleness, the curse of dissent among absolutist ideals?  Or was she simply the loose thread that unravels the sweater?

Jonathan Church infuses a crisp decisiveness to his multiple characters—as landlord, father, and especially as investigating detective.  Church gives the latter character a resolute certainty of purpose that highlights the differentials between the 6-man community and the dominant culture they left behind, though the detective and his quest for expedience hardly seem the embodiment of the moral high ground, if there is such a place in this story.

Ironically, as a work of ensemble theatre–a testament to the same collectivism that the script seems to question so deeply–the production works quite well.  As a philosophical wordfest about the corrosive limits of idealism and a repudiation of individualism parallel to the horrors of Pol Pot, the script, in my view, would be well served to jettison the objectionable references to Pol Pot and focus its considerable word power on the complex contradictions of its narrative.

Running Time: 2 and a half hours.