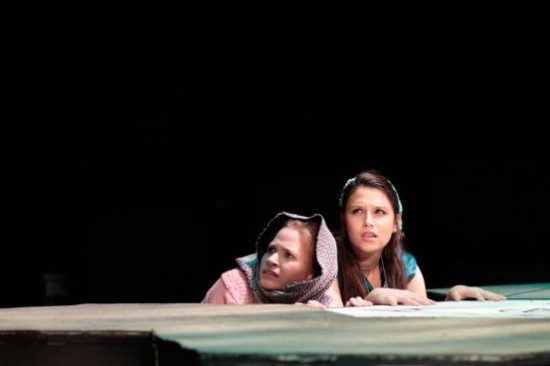 It seems fitting that LARP and theater would eventually meet.

After all, LARP – or Live Action Role Playing, that fringe group of costumes, swords and adopted personalities – involves some of the vocabulary of drama and all of the fun.

Qui Nguyen’s She Kills Monsters succeeds in introducing the world of the role-playing game Dungeons & Dragons to the outside world while never condescending to its adherents. In director Randy Baker’s vibrant production for Rorschach Theatre at the Atlas Performing Arts Center, it’s also a celebration of the mid-90s, a time now 20 years past, with all of its flashy (and nostalgically familiar) musical cues and dances.

Some things never age, though, and that’s the high school hive of cliques, petty hatreds and humiliations. And on this vast landscape – Ethan Sinnott’s stage is like a big, wide gym for nerds, honeycombed like the dice of the role-playing board game that captured so many – a deeper story plays out about a sister who never knew much about her younger sister and her nerdy friends.

…a winning team you wouldn’t mind following into any adventure.

The clever play concerns a young high school teacher whose students include some of her kid sister’s friends. Now that the sister – and the rest of her family –have suddenly perished in a big offstage car crash, Agnes (Maggie Erwin) wants to learn more about her. When she finds a notebook filled with D&D adventure schemes, she enlists the school’s head nerd Chuck Biggs to help translate it for her and eventually, navigate her own entry into the fantasy world, where her sister Tilly, a legend among D&D players, is amazingly still there.

As Chuck, Robert Pike is a big personality, big enough to serve as both Dungeon Master for the game at hand and narrator of the play. As the warrior sister, Rebecca Hausman infuses Tilly with all of the skills and charisma such a heroine warrants. Mostly, she leads the fighting on the multi-level stage wielding a big sword in a number of battle scenes so intricate and impressive Casey Kaleba gets a warranted front page credit on the shows’ program. It’s a wonder there aren’t injuries or accidents with so many swirling swords and fighting sticks. Some of the demons who fight also do cartwheels and as this plays right before the four sets of seats, it’s fairly spectacular.

The young, convincing fantasy ensemble led by Emily Kester, Tori Boutin and Louis E. Davis are a winning team you wouldn’t mind following into any adventure. Their foes, in terrific costumes by Debra Kim Sivigny and striking choreography by Sarah Taurchini, are a splendid bunch led by two girls who bring out every inch of malevolence a cheerleader can carry, Rachel Viele and Claire Aniela.

Joshua Dick, Amanda Forstrom, Emma Lou Hebert and Seth Rosenke round out the exuberant dozen cast members, all of whom seem to be fully in synch with what they’re doing and simultaneously having the time of their lives.

By the time the action reaches a 90s dance-off, it’s just pure pleasure, part of a show that’s more likely than most to pack a theater with young appreciative audiences alongside the older, more reliable Rorschach crowd, who are no doubt also having a blast.

Advisory: Adult themes and language. Teens will not be shocked.

She Kills Monsters by the Rorschach Theatre continues at the Atlas Performing Arts Center, 1333 H St., NE through Sept. 14, 2014. Tickets are available online.