Theatre Review: ‘The Campsite Rule’ presented by the Washington Rogues at the Anacostia Playhouse 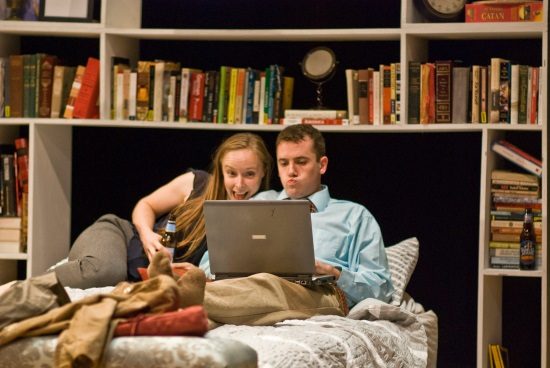 The Campsite Rule, presented by the Washington Rogues at the Anacostia Playhouse, is the tale of the relationship between a professional young woman and a college freshman. Quickly becoming one of my favorite venues, the Anacostia Playhouse is the perfect setting for a play of this caliber. Untraditional and flexible, the stage at the Anacostia Playhouse is a blank-canvas that enables directors time and time again to create artistic environments that engage audiences on multiple levels. For this production, Director Megan Behm and her production staff utilize key pieces of furniture and suggestive lighting techniques to convincingly transform a dorm room party into a freshman boy’s dorm room, two separate restaurants and the apartment of a hyper-neurotic woman in her mid-twenties. A tall order, skillfully and successfully executed.

All good love stories start in a college dorm room and The Campsite Rule is no exception. It’s college reunion weekend and current students are free to intermingle will-nilly with alumni. Drinking gingerly from red solo cups, erstwhile college alumnae Tina (Hazel Lozano) and Susan (Rachel Manteuffel) cling to each other nervously, stranded in the midst of college students that just look so young! Left to her own devices when Tina is called back to work, Susan has a casual sexual encounter with Lincoln (DC-area native Matthew Sparacino), an eighteen year-old college freshman. An odd couple on paper, Susan and Lincoln have a unique chemistry that cannot be denied. Susan eventually justifies the novelty of their situation by agreeing to be Lincoln’s initiate into the wide world of sex, bearing in mind the wisdom of the “Campsite rule.” Meanwhile, in a clever juxtaposition of romantic circumstances, Tina is negotiating an untraditional relationship of her own with an older, married man from work. As both women navigate very different and oft-stereotyped twenty-something romantic “Campsite” crises, Lincoln remains adorably single-minded as his pursuit of Susan shifts predictably from the sexual to the romantic.

The three person cast of The Campsite Rule is charming and wholly believable in their roles. Sparacino, doe-eyed and soft-spoken, yet insistent and persistent, is convincing as a college freshman. Manteuffel masterfully embodies Susan’s unique brand of sexual confidence, flitting skillfully between the nerd and the seductress. Lozano’s Tina is just confused and loud (and knows it!). Most enjoyable is the strong sense that each of these characters know who they are and are not afraid to be themselves. Writer Alexandra Petri’s original script is smart, fast-paced and chock-a-block with zany references, jokes and witty banter, cleverly utilizing “that’s what she said” jokes in conjunction with references to Gilbert and Sullivan operettas, “Mean Girls” and “Lady Chatterley’s Lover” to create a unique depth of character for her characters.

The Campsite Rule reaches its climax when it becomes clear to Susan that Lincoln wants a relationship consisting of more than sexual experimentation. What should Susan do? What would you do? Ultimately, it’s worth the trip to the Anacostia Playhouse to see what happens.

The Campsite Rules runs through August 16th 2014 at the Washington Rogues in residence at the Anacostia Playhouse, 2020 Shannon Place, SE, Washington, DC 20020. For tickets click here.