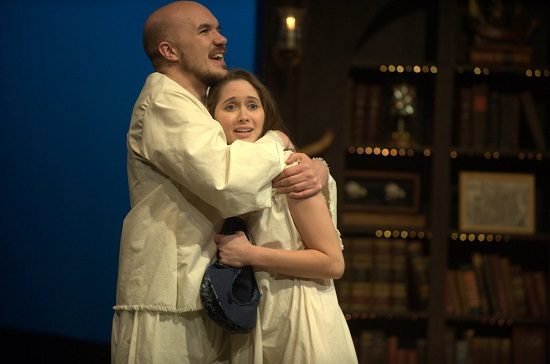 Annapolis Shakespeare Company’s production of The Tempest is fanciful in story, aesthetically pleasing in design, and acted with enthusiasm and a sense of humor.

The Tempest tells the story of Prospero, once the duke of Milan, who was usurped by his brother and exiled to a far-flung island in the middle of nowhere. Prospero’s only companions are his daughter Miranda, the supernatural denizens of the island, and his book collection, from which he learns tricks of illusion and magic. After twelve years in exile, Prospero uses his magical powers to stir up a massive storm that maroons his betrayers on the island. What follows is a bit of romance, a bit of revenge, a good helping of comedy, and a few supernatural dance numbers.

The production is not overwrought with pathos, and succeeds in its aim to transport the audience to a world of magic and wonder.

This Tempest treads familiar ground, in the sense that this is not a gimmicky re-vamp that sets the story in, heaven forbid, outer space. The island is tropical, the sprites look like Cirque du Soleil performers, and the tempest washes up a handful of Italian noblemen in late-16th-century regalia. Director Jay D. Brock does not stretch the concept to ridiculous proportions, and the production stays within the boundaries set by Shakespeare’s imagination.

Brian Keith MacDonald, Alex Zavistovich, and Raven Bonniwell deliver notable performances as Prospero, the savage Caliban, and Ariel, Prospero’s mystical henchman. MacDonald is resonant and commanding as Prospero, at his best in the latter half of the play, when Prospero takes the stage to cast the last of his incantations. Zavistovich jumps headfirst and snarling into the grotesque character of Caliban. Bonniwell, as Ariel, moves in abstract grace, bringing to life a creature unique among its fellow island spirits.

Charlie Retzlaff and Kiernan McGowan steal the show as Trinculo and Stephano, the commedia dell’arte-inspired comic duo. Retzlaff, in particular, speaks the text with remarkable clarity. People unfamiliar with Shakespeare’s style will have no trouble catching the punch lines of the numerous bawdy jokes.

The design elements are beautiful. A scenic design by Andrew Cohen frames the stage in driftwood, and features as centerpiece a looming antique bookshelf containing the source of Prospero’s power. A tattered white drapery functions as both boat sails and the torrential wind and rain. Catherine Girardi’s lighting design casts the stage in humid greens and blues. Maggie Cason’s costume design is bold and evocative, particularly in the case of Trinculo and Stephano, who juxtapose one another in clashing motley and black and white stripes. Gregg Martin’s abstract sound design is rich in texture, although the soundtrack sometimes overpowers the voices of the actors.

The charm of Annapolis Shakespeare Company’s The Tempest lies in its accessibility and lack of pretension. The production is not overwrought with pathos, and succeeds in its aim to transport the audience to a world of magic and wonder.