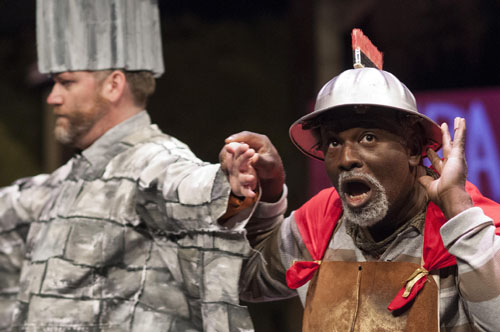 The flourishing theater scene in Baltimore has added a wonderful new addition to its roster. Following in the footsteps of Everyman and Single Carrot, The Chesapeake Shakespeare Company has brought new life to a historic building and made it their new home. It is a win-win for both preservationists and theater lovers. While the company will still have its outdoor summer production at “The Ruins” in Ellicott City, this new facility gives them a space to grow and expand their repertoire.

The CSC has done an outstanding job of renovating the Mercantile Deposit and Trust Company bank building. Sleek, modern elements have been integrated with the magnificent architectural details (most notably the decorated ceiling) of this 19th century beauty and created an Old Globe style theater. The seats intimately surround the stage on three sides and go straight up two more levels. Interaction with the audience is a trademark of the company and theater has been designed to maximize that interaction as actors (and staff) mingle with the audience before, during and after the performance.

The CSC has made its debut in Baltimore with a delightful concoction of magic and mayhem, bringing the promise of many wonderful productions for years to come.

It seems fitting that perhaps the bard’s most beloved and lively comedies, A Midsummer Night’s Dream was chosen to christen the new space.
Set in Athens, the Duke is about to be married to his future Duchess. A group of common workmen endeavor to present a play (“the most lamentable comedy”) honoring the marriage, while two sets of lovers wander the woods trying to sort out their affections for each other. They all fall into the web of the fairy king who jealousy of his fairy queen sets in motion a series of comical events. The play is all about love and how it can make fools of us all. Directed by company founder Ian Gallanar, this production brims with energy and fun. Music, spanning eras and genres, and dance (choreographed by Nellie K. Glover) were also incorporated into the production. Though this showed off the diversity of the cast, a few of the presentations felt awkward. However, the selections, chosen by Scott Farquahar (also in the role of Snout), supported the themes of the play.

With a minimal set, Daniel O’Brien – a triple threat as the technical director, scenic and lighting designer – made full use of his considerable skills to create a sense of place and atmosphere – from the bright, sunny Athens to the mysterious, magical woods inhabited by fairies.

Costume designer Kristina Lambdin has wonderful sense of detail, creating an early 19th century look for the court and lovers and the colorful, mismatched ensembles for the “Rude Mechanicals.” The costumes for the play-within-a-play, Pyramus and Thisbe, enhance the merriment, notably that of the Wall. The commanding garb of the Fairy King, Oberon, is given a magic touch with the use of iridescent beetle wings from Thailand. (These were previously seen in the work of the grand dame of costume designers, Colleen Atwood, in the 2012 film Snow White and the Huntsman.) The fairy costumes are luminous – beautiful wings with lights that mysteriously to go on and off at random, like summer fireflies. The only problematic element is the donkey’s head, which makes Burgess sound as if he is in mask rather than transformed by the mischievous Puck (an energetic Vince Eisensin).

While all the actors give solid performances there are a those who are simply captivating. Gregory Burgess steals the show with his sense of comedy and timing as the Bottom the Weaver /Pyramus. His exuberance and sweetness are a joy to watch. Burgess is supported well by the remainder of the Mechanicals – Farquhar as Snout, Jeff Keogh as Quince, and Robby Rose as Starveling. Bobby Henneberg as Flute shines in his southern belle interpretation of Thisbe while the shy Snug (Matthew Ancarrow) comes into his own as the Lion.

As the lovers, Lysander (Travis Hudson) and Demetrius (James Jager) do an admirable job keeping up with the powerful and often wonderfully slapstick performances of the ladies – Rachel Jacobs as the petite but feisty Hermia and especially Audrey Bertaux as the gangly, lovelorn Helena. And Kathryn Elizabeth Kelly as the Fairy Queen Titania is a statuesque Valkyrie – an equal match to her king, Oberon (a commanding Scott Alan Small).

The CSC has made its debut in Baltimore with a delightful concoction of magic and mayhem, bringing the promise of many wonderful productions for years to come.