‘A Quick 5’ with Jenna Sokolowski 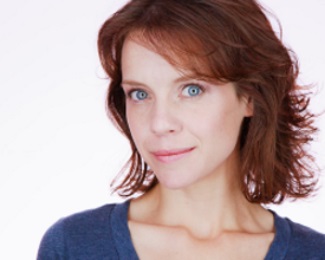 Jenna Sokolowski is currently opening the 2014/15 season of Arena Stage as Phyllis in the world premiere of The Shoplifters which runs through October 19th. Although this is her Arena Stage debut, she has been performing in and around the area for over ten years. Select area appearances include Beneatha’s Place and Clybourne Park at CenterStage, Maria in Mr. Burns, A Post-Electric Play at Woolly Mammoth Theatre Company, Elsa Schrader in The Sound of Music and Lily St. Regis in Annie at Olney Theatre Center, April White in Savage in Limbo at MetroStage, Susan in Title of Show at Signature Theatre, Fanny in The Clandestine Marraige at Folger Theatre, “Little” Edie Beale 1941 in Grey Gardens at Studio Theatre, Eurydice in Eurydice at Round House Theatre and Beatrice in John & Beatrice at the Hub Theatre.

She received a Helen Hayes award in 2006 for her work as Sally in Urinetown at Signature Theatre. As you can see from Jenna’s well rounded list of credits, she can do everything from drama to musicals to the classics. I have seen her in a bunch of shows and no two performances are alike. She always turns in a performance to remember and I’m sure The Shoplifters won’t be any different. Jenna Sokolowski is a performer you always expect nothing but the best from and when leaving the theatre you will most likely say “Wow! What a great performance!”

Prometheus Bound at the Studio Theatre; I was one of 16 in an entirely female Greek chorus. We were the daughters of Ocean so our hair was the color of sea foam, our costumes were very tight and I played the soprano recorder.

Can you please tell us a little bit about The Shoplifters and the character you play in the show?

The basic storyline is that two shoplifters get caught concealing 16oz. rib eye steaks under their dresses.  An overzealous security guard catches them and thought-provoking hilarity ensues.  My character, Phyllis, is stealing for the first time – she’s accompanying Alma, a career shoplifter and her only friend.  As a free spirit who believes in karma, Phyllis is conflicted about having been caught. She’s a nervous wreck on the edge of a meltdown; a little confused and a lot of fun to play. 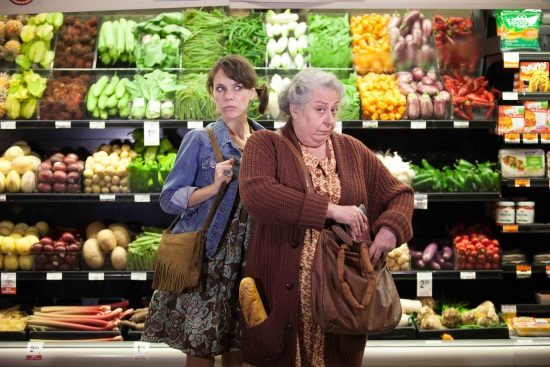 (L to R) Jenna Sokolowski (Phyllis) and Jayne Houdyshell (Alma) in a pre-production photo for The Shoplifters. Photo by C. Stanley Photography.

What do you enjoy the most about creating a role in a world premiere production like The Shoplifters?

This project has been especially lovely because it’s not only written but also directed by Morris Panych.  He’s given the actors full freedom to play around and discover our characters from within while helping us understand the world of the script in which we all exist.

You have performed in many plays and musicals in area theaters. Can you please pick a favorite production?

Playing Little Sally in Urinetown at Signature Theatre in 2005 was an incredible experience I’ll never forget; I loved working with so many wonderful actors under the direction of Joe Calarco.

What are your next few projects after The Shoplifters?

I’m taking a breather from the theater so I don’t have any upcoming shows on the horizon.  I’ve started brewing Kombucha at a cafe in my neighborhood and I’m hoping to grow that little business into something much bigger.