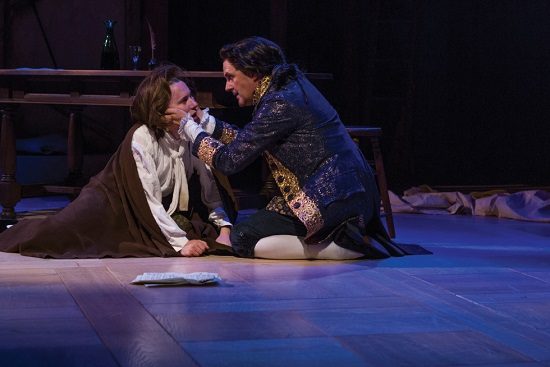 Center Stage opens its 2014-15 season with a monumental revival of Sir Peter Shaffer’s 1981 Tony Award-winning play, Amadeus, under the expert direction of artistic director Kwame Kwei-Armah. Most are familiar with the equally acclaimed 1984 film version about the mythical relationship between Baroque composers Wolfgang Amadeus Mozart and Antonio Salieri. The movie garnered eight Academy Awards – with perhaps, in some ways, a stronger script. While the refrain in the Viennese court is that Mozart uses too many notes, Shaffer’s script often uses too many words.

The experience begins in the lobby of the theater with members of the ensemble in the gorgeous costumes designed by David Burdick, mingling with the crowd and sitting in small set pieces filled with furniture and props representing 18th century life in Vienna. The experience continues right before you enter the theater itself and culminates with a magnificent set designed by Timothy R. Mackabee that uses every inch of the stage.

With an incredible cast and creative team, Kwame Kwei-Armah’s production of Amadeus is a tour de force and a brilliant opening to Center Stage’s new season.

The large cast boasts Broadway veterans along with immense local talent – most notably Bruce Randolph Nelson, a theatrical gem and chameleon who always delivers Broadway-worthy performances at this theater and as a company member at The Everyman. His Salieri is no exception. For it is Salieri’s play, often speaking directly to the audience in lengthy monologues. Nelson manages to master them with such deeply felt emotion that at times his performance brought me to tears. He was equally adept with the character’s sly humor and transforming himself effortlessly from the older Salieri to his younger self and back again throughout the play.

In his day Salieri was considered a superstar as the court composer for the slightly clueless but amenable Austrian Emperor Joseph II (played brilliantly by Kevin Orton). Salieri discovered as a boy that “music is God’s art” and pursued it with hard work and diligence, honoring Him through his efforts.

Imagine then being confronted with pure genius and realizing you are merely mediocre. This revelation cuts even deeper because it comes in the form of a crude, man-child who uses scatological humor and baby talk as sexual foreplay, dresses like a clown and possesses a singularly obnoxious laugh. Yet breathtaking compositions flow effortlessly and fully-developed from the mind of this creature even before pen is put to paper.

There is nothing left to do for Salieri but to disavow God and set out to destroy his musical rival by thwarting his career at every turn – denying him work, trying to seduce his wife and, in his own mind, causing Mozart’s premature death by poison.

The irony is that despite Salieri’s formidable success in his own time, he is rarely heard of again as Mozart’s music and genius lives on to this day.

Stanton Nash’s performance as Mozart goes toe to toe with Nelson’s. Both of these men possess characteristics both despicable and heartbreaking. While Mozart’s behavior is often loud and grossly inappropriate, he is also endearing – marrying his wife for love rather than for money or social approval from his father and infectiously exuberant and joyful in his work. Like Nelson, Nash conveys all the complexities of his character, making him deeply human.

The supporting cast does a beautiful job as well. Kayla Ferguson is a standout as Constanze Weber, the seemingly foolish yet underestimated and fiercely supportive wife of Mozart.

As the men who surround the Emperor, Steve Brady (Count Orsini Rosenberg), Gannon McHale (Count Von Strack) and James Joseph O’Neil (Baron Van Swieten), turn in solid performances. While Yvonne Erickson as Salieri’s oft-neglected wife Teresa and Natanya Washer as his protégé/mistress Katherina Cavalieri aren’t given much to do, they are luminous additions to the production. Jay Russell and Lucia Spina are deliciously delightful as the “Venticelli, ” the snarky Greek chorus who keeps Salieri up on all the gossip.

The rich costumes and set are complimented by wonderful work by the rest of the production team. Lighting design by Michelle Habeck sets the mood with sometimes just the light of a few candles. Sound designer Victoria Deiorio’s perfectly timed integration of Mozart’s music is the icing on the cake.

With an incredible cast and creative team, Kwame Kwei-Armah’s production of Amadeus is a tour de force and a brilliant opening to Center Stage’s new season.

Running Time: Approximately 2 hours and 10 minutes with one 15-minute intermission.