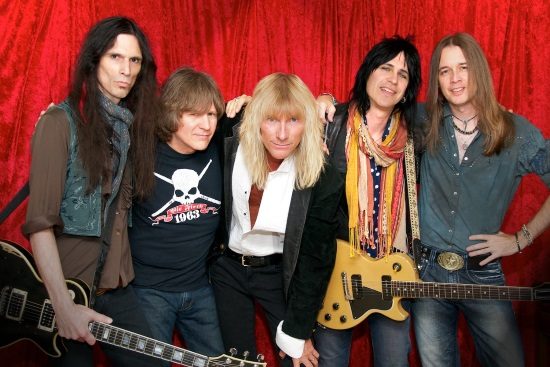 I have been following Kix through all of their various incarnations going back to when they were ‘Shooze’ in the mid-late 70’s. (They had to change it because there was a national act called ‘Shoes.’)

Way back when they had an undeniable energy, and the humorous and talented frontman, Steve Whiteman, had a knack for funny wisecracks and inside jokes that kept the audience laughing & entertained as they plowed through cover material with an original number thrown in here and there.Well, after not seeing this band for , oh , about 25 years, I am delighted to report that the energy, along with Whiteman’s ability to hold the audience at the Rams Head Live! in the palm of his hand, is still there in great abundance. And now they play all original material, having achieved platinum status with their album ‘Blow My Fuse’ in 1988.

They have had other releases, of course, but that one launched them into the national spotlight back then.And speaking of which their latest release of new material in almost 20 years, ‘Rock Your Face Off,’ has been well-received by everyone from the inked-up 20-and 30- somethings to the aging hippies who, judging from the crowd, make up Kix’ fan base.After the final warm-up song, “Let There Be Rock,” by AC/DC, blared over the speakers, Kix bounded onto the stage and opened with “Can’t Stop The Show,” which reminds you of one of those signature opening numbers (a’ la Cheap Trick’s “Hello There Ladies and Gentlemen”) but is actually off the new release and I am sure that they will be using to open for a long time to come.Kix is one of those bands that has such a great selection of original songs that I found myself once or twice slapping the side of my head, as I am won’t to do when seeing an act that has been ‘around’ for a while, and saying ‘I forgot about THAT one!’ If you are over 50 I am sure that you know what I mean.

Once they had gotten to classics like “The Itch’ & “Cold Shower,” I felt like it was the 80’s all over again, which is when my younger companion was learning to ride a two-wheeler and still believed in Santa Claus. But she was totally familiar with the material. Heck, I was married with a mortgage BEFORE Kix went platinum. But they are both long gone now. Along with my hair. But let’s move on.

About midway through the show Whiteman, between songs, told a story about a wristband that he had around his belt. It was the the dogtags of a serviceman who had died in Afghanistan and was given to the Kix frontman by his military buddy who had also served. The military guys had met Kix after a show and told the singer about how there music had kept them motivated and moving forward in difficult times. It was a stirring moment when you could hear a pin drop, but soon cheers of ‘U-S-A U-S-A’ echoed through the crowd. Then the band marched on, playing familiar classics while interspersing some new material along the way. “Love Me With Your Top Down” is a new one that I and the crowd enjoyed immensely and I am sure will be in heavy rotation on rock radio everywhere if it isn’t already.

The lead singer changed shirts a few times with the loudest ovation going up when he donned a vintage Orioles jersey with the number 5 on the back and proclaiming that Brooks Robinson was always his favorite player. Let’s admit it, Kix ‘made their bones’ in Baltimore and will always have Baltimore blood. Sure, they will be playing the Whiskey A-Go-Go in L.A. soon and will be on the ‘Monsters of Rock’ cruise next year, along with a Vegas stop in the near future but they are Baltimore’s own Rock Legends and the fans are darn proud of it.

I must admit, this show was so entertaining that I even enjoyed the obligatory drum and guitar solos, which is out of character for me, since I usually high-tail for the lav when I see them coming. Brian ‘Damage’ Forsy the & Jimmy ‘Chocolate’ Chalfant delivered on the guitar and drums, respectively, midway and toward the end of the show.

Seeing Kix at Rams Head Live is a night that I’ll never forget!

Kix will be at the Rams Head Live! in Baltimore on December 20, 2014 for a concert called Kix Mas Featuring Kix. For more information, click here.

Bill Shuey was born and raised in the Baltimore area and has been going to live music events for over 35 years. He has attended over 500 shows in all genre's, in venues great and small, and is always looking forward to his next show.