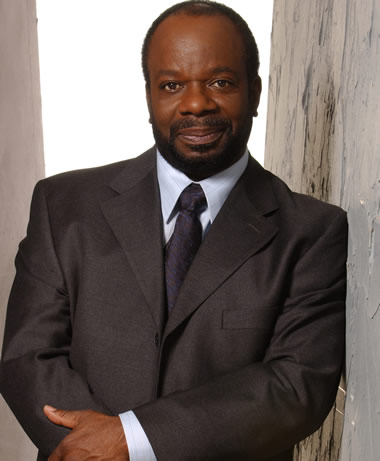 Actor Joseph Marcell is living his dream right now. He is currently touring the states playing the lead role in Shakespeare’s King Lear. This production started at Shakespeare’s Globe in London and is now playing at our very own Folger Theatre through September 21st.

The DC press core was recently invited to participate in a short teleconference with Marcell right after he completed a matinee performance in London. You would think that after three hours on stage Marcell would want to crash but he was as gracious as could be.

First off, if you are only familiar with Marcell from his work on TV’s The Fresh Prince of Bel Air, then you are missing something. Born in St. Lucia, Marcell is an accomplished classical actor who has appeared locally in productions of Gem of the Ocean at Arena Stage, Romeo and Juliet at Shakespeare Theatre Company and As You Like It at Folger Theatre in 2006.

Marcell had played the role of Earl of Kent in King Lear a few years ago in San Diego so the question of whether or not he had aspirations of playing Lear himself someday came up. Marcell responded “Actors hope to play the big one, but I didn’t think necessarily that I would. I’ve seen wonderful actors play the part — John Wood, Ian McKellen, Robert Foxworth [who played the role in that production in San Diego] —but, in the end, having knowledge and information is not the same as doing it yourself. Always actors have a kind of arrogance: ‘I could have done it better.’ But when it’s your turn, it’s not as easy as that.”

With this production of King Lear, Marcell is doing something that is a dying tradition. The show is bringing Shakespeare to the masses by touring to various cities. This use to happen constantly but in recent years, most shows present a sit down engagement in one spot and that’s it.

Shakespeare’s Globe in London is an outdoor venue and here in the U.S. the show will be playing indoors. Knowing this, Marcell was asked what the differences are between playing a show in an outdoor and indoor environment. His response was “There is a world of difference. For one thing, [inside] you don’t have pigeons, helicopters, cars, pleasure boats hooting as they go by. But the most important thing is that, outside, when the audience is rained on, so are you. It’s a shared experience, almost a participatory thing. One of the beauties of this job is that every night is almost a first night. There are different venues. Every week, we adjust to a new location, to new audiences.”And, when outside, every performance has its own challenges: “It might rain. In Cambridge, during the scene on the Heath, when I say, ‘Blow, winds,’ there was thunder and lightning and rain and hailstones, and the audience shuffling with their umbrellas, and we were all, from the Stage Manager upwards, soaked —and yet they stayed through the whole 2 hours and 40 minutes of the play.”

As to what makes this production different from some of the others Marcell says “Truly, our production has not been cut recklessly. The fat has been cut so the story comes right at you. One of the beautiful aspects of a tour is that there is no time to linger. The pace and dynamic has to go forward and be maintained until the end. This is not a production that you can sit and admire. You have to participate, to be a part of it. You are part of my kingdom, seeing the decisions I am making. And it becomes about the words, how special they are, and how we are claiming them as if for the first time. How we take obscure jokes that are 400 years old and make them ours. We don’t bring the play down to you, we rise up to it.”

You have to hand it to Marcell. He has big shoes to fill. Actors such as Laurence Olivier, John Lithgow and Stacey Keach have all tackled the supreme Shakespearean character of King Lear. He is keeping up the tradition of those that have come before him. King Lear is the character that every actor wants to play and now you have the chance to live the dream along with Marcell and company at Folger Theatre.

NOTE: King Lear is one of the Top 5 Shows of the Week!