Opera Review: ‘Fatal Song: The Great Opera Murders’ at The In Series 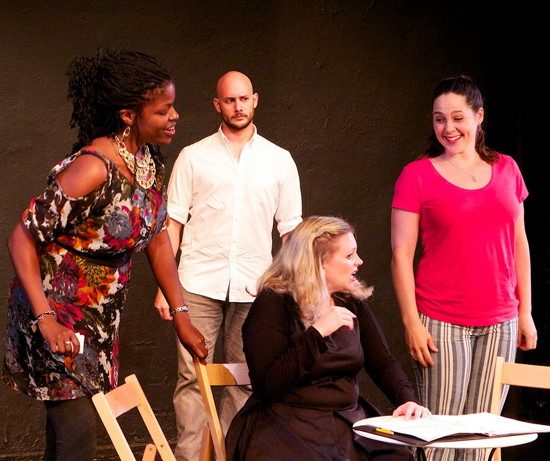 Assembling a nice night of operatic arias for a cabaret production, Kathleen Cahill was struck by a commonality among the women in classic productions: They pretty much all ended up dead in all manner of ways.

So Fatal Song: The Great Opera Murders, presented by the In Series at the Source Theatre, is a kind of sardonic romp through all their bad luck, as the ladies compare notes and warnings backstage. It also allows them to sing some of the most familiar arias from the world of opera.

The lighthearted production well matches the In Series mission to shed some of the stuffiness of big house opera even as it’s presented in about as close a proximity as one will likely ever see.

For all the casualness of the banter that loosely ties the song together, done in a slang that is supposed to represents what Cahill describes as “an undefined sort-of-present,” the cast of women in their fine gowns (designed by Donna Breslin) trade notes, advice but mostly songs from the wealth of Italia romantic operas as well as a splash of Mozart, whose songs seem bright (and relatively death free) by comparison.

There are a couple of male voices in the work, and it’s a bit misleading that both of the duets in which they appear — Brody DelBeccaro with Carrie Anne Winter in something from Mozart’s “The Marriage of Figaro”; and Jason Lee with Annie Gill’s Manon from the Massenet opera of the same name — come relatively early in the evening.

Otherwise, the men are banished (except for Del Beccaro’s menacing and otherwise wordless bossing around throughout the show) it’s all the women all the time, with a strong ensemble of soaring voices that also includes Daniele Lorio, Adrienne Ivey and Heather Bingham, who also handle their little acting bits well.

That’s a lot of arias at once; she could have called her piece “The Sopranos,” if that name hadn’t been taken.

But it’s a lot of fun. Music director Francis Conlon provides all the accompanying music on piano, switching styles at will. Director Rick Davis keeps things moving even when the tendency of singers is to stay still and deliver. Lighting director Stefan Johnson illuminates Greg Stevens’ set with the right old-timey touch, with the glow of actual footlights.

One odd piece of information in the program is that the author Cahill also writes all the introductions on public television’s “Masterpiece” said by Laura Linney and Alan Cummings.

She likely didn’t write the long and funny introduction to the piece provided by producing and artistic director Carla Hubner, who comes up with her charming monologue seemingly off the cuff.

That’s the kind of approach that works in a production as pleasing as this.

Advisory: Seems fine for all.