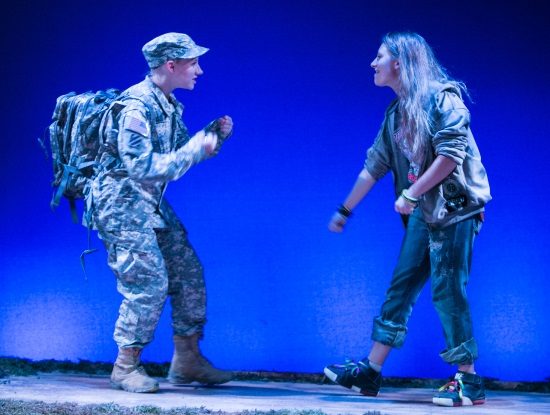 The topic of what happens to our service men and women has been explored in numerous film and TV shows as well as on stage. Theater Alliance is opening its twelfth season with a world premiere play in which the main topic is just that.

Spark by Caridad Svich tells the story of the Glimord sisters. There’s Evelyn (Sarah Kathryn Strasser) who has been taking care of things in the family’s home since her mother died. Then we have Ali (Alison Donnelly) who is the rebel of the bunch. At one point she runs off to be part of a boxing match even though she’s never done that kind of thing before. The result has a good and bad side to it.

The play starts with the two sisters waiting for Lexie (Anna Lathrop) to come home from serving in a conflict that you assume is Afghanistan, although it’s never specified. It is not a happy homecoming. Lexie can’t even look at Evelyn and can hardly eat anything. She does however interact with Ali. We come to find out that Lexie and Evelyn haven’t gotten along for a very long time. Evelyn has always been pushy and basically forced Lexie to enlist so she could send money home.

This is the main storyline and is the most interesting. Svich then gives us a love angle between Evelyn and a longtime friend named Hector Johnson (Carlos Saldaña) who has been trying for a while to win Evelyn’s affections. Then for good (or bad) measure there is an overly long scene between a former serviceman named Vaughn (Addison Switzer) and Lexie. This is where she has her moment of clarity as to what she has to do if she is going to adjust back to civilian life. I will let you see the show for the payoff.

Performance wise we have a very strong cast. Anna Lathrop’s performance gets inside of Lexie’s head as she gives a vivid portrait of a soldier just back from war. You can tell she has been rattled even though she says she’s fine.

Alison Donnelly as the rebellious Ali has plenty of fight in her performance. She shows how tortured young people can be and her scenes with Lathrop are touching as you see the sisterly bond between their characters.

Sarah Kathryn Strasser as Evelyn fully commands the stage with her character’s controlling nature and has good chemistry with her fellow actresses.

The two men, while being good actors, don’t come off as well because the characters aren’t as strongly drawn. Carlos Saldaña as Hector does leave you rooting for him to get the girl but Addison Switzer as Vaughn is saddled with a scene that no actor could make work. The scene between him and Lathrop goes on forever and borders on rambling in sections.

Theater Alliance’s Artistic Director Colin Hovde has staged the show at a gingerly pace which means there is no build in the action. Everything just casually moves along as if you were watching a movie more than a stage play. There is no urgency and without that element you’re not left with much.

Production elements are all good. Deborah Whitley’s unit set makes good use of the stage space at Anacostia Playhouse while Martha Mountain’s lighting creates all the moods needed perfectly. Thomas Sowers’s soundscape keeps us fully engulfed with atmospheric outside sound throughout and Kevin Laughon’s props, particularly the Pabst Blue Ribbon Beer cans, are a nice touch.

Despite good production elements and a cast of strong actors, for me Spark never fully ignites.

Running Time: One Hour and 55 minutes with one intermission.

Spark runs through September 28, 2014 at Anacostia Playhouse which is located at 2020 Shannon Place, SE , in Washington, DC. For tickets, click here.