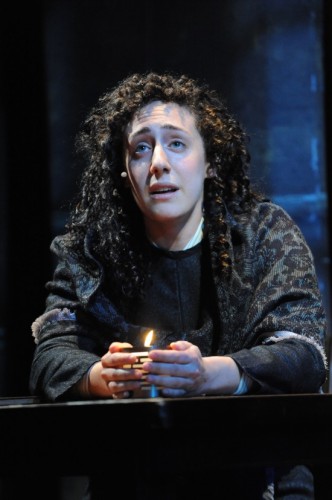 Few characters are as vivid in the imagination as Isaac Bashevis Singer’s Yentl, the bright young Rabbi’s daughter who, upon being orphaned, dares to disguise herself as a boy so she can study at a Yeshiva , a Jewish male religious school as exclusive as they come.   The complications that develop in her story—a crush on a classmate who becomes her best friend, an arranged marriage to the richest girl in town, etc.—were amusing enough when they first appeared in print; but the implications of the story have resonated for generations.

In an age when boys and girls can study Torah together, when the phrase “marriage equality” is suddenly on everyone’s lips and gender roles continue to shift back and forth, Yentl’s tale has taken on a meaning beyond what Singer could have imagined.  And it should come as no surprise that Barbara Streisand’s grandiose, Broadway-style film adaptation simply doesn’t suit the times.  We need Singer’s story minus the schmaltz, minus the swelling orchestra to tell us how we’re supposed to feel.  We’re ready for a Yentl with greater depth and nuance.

It is such a joy to encounter Yentl again, and this time as Singer intended.  In Leah Napolin’s brilliant stage adaptation of the story—which she developed with Singer himself—we see the girl as fragile, inquisitive, utterly innocent about worldly things but passionate about her faith.  Theater J has given us gems in the past, but Shirley Serotsky’s production is truly special; and Shayna Blass’s portrayal of our young heroine makes for a truly memorable evening of theatre.  The show is somewhat experimental so a few tweaks and edits, here and there, are in order; but it is not to be missed.

Blass, through her many soliloquys, pulls off the neat trick of grabbing our attention without really demanding it.  And Michael Kevin Darnall gives a fine turn as Yentl’s classmate/BFF Avigdor.  Darnall and Blass’s chemistry is enduring, as their ‘schoolboy’ friendship weathers the storms of arranged marriages and the demands of adult life.  Sara Dabney Tisdale shines here as Hadass, the love of Avigdor’s life and the third side of Singer’s love triangle.  Although forbidden to marry Avigdor, in a key plot twist Yentl gets to marry Hadass—for reasons too complicated to go into here; suffice it to say that Yentl’s explanation to Avigdor comes dangerously close to revealing her true identity.  One of my favorite scenes comes when Yentl tries to teach the Torah to Hadass; we are reminded that Yentl’s desire for learning is unique, and given the burdens and responsibilities most women had in those days, learning was a low priority for many.

Thanks to the naiveté of their times, the central problem with Yentl’s marriage to Hadass (i.e., no kids) only gradually comes to light; not so the problems with Avigdor’s marriage to Pesha (because he’s an actual guy his reasons for marrying are, alas, more straightforward).  Avigdor and Pesha are in constant friction from the moment they meet; and Judith Ingber is perfectly witchy as Pesha (I mean that in the best way); she gives us the acceptable model of assertive femininity for those times, a woman with a mind for business and no patience for bookish wimps like her husband.  (Academics take note:  the poverty associated with study of the Torah is one of the defining sub-plots here).

Serotsky has given us a robust cast of multi-talented players, who double as musicians throughout the play—Jonathan Tuzman’s musical direction takes a motley assortment of instruments and creates a vaguely East-European band, part klezmer and part American folk.  And although Jill Sobule’s songs don’t always hit the mark (more later), the music is an integral part of the performance and creates an atmosphere that is by turns joyful and playful.  The voices range from adequate to quite good, with Judith Ingber setting herself apart for her fine melodic lines—when she isn’t burning Avigdor’s ear as Pesha, of course.

One false note comes when some of the cast members, chanting in Hebrew, use the occasion to show off some Broadway chops.  Although I am not to the manner born it is my impression that these are simple prayers, private utterances and not show tunes.  It’s jarring to see observant Jews portrayed as if they were musical theatre majors; fortunately this problem is easily fixed.  (A word to the wise …).

Perhaps the biggest challenge here is Jill Sobule’s; she has the unenviable task of creating appropriate music and lyrics for this classic Yiddish tale, and Singer’s Yentl the Yeshiva Boy is truly a tough act to follow.  I mean it’s already a classic, how can you put it into song?  We’ve already seen what happens when the movie takes it on—the results are often sentimental mush, sincere but cloying and ultimately a distraction.  (That Singer hated it might help to clinch the argument here).

It’s hard to match Singer’s chops when it comes to wordplay, but there are at least two occasions where Sobule hits the mark; in the subversive “David and Jonathan” (about the greatest biblical bromance of all), and a later tune whose four-letter title I can’t print here, but which lays bare Yentl’s pent-up fears and frustrations.  Choreographer Laura Schandelmeier gives welcome life to Sobule’s music, matching Singer’s sense of humor with moves that can leave you aching with laughter (yeshiva boy pole dancing?  Who knew?).  Robbie Hayes’ earth-toned library set is made all the more lively by Schandelmeier’s action, and the cast does a great job with its dance sequences and with the many set-changes necessitated by the story’s brisk pace.

The difficulty is that Sobule’s lyrics tend to fall back on the pablum that has plagued musicals for years, evoking bland, life-affirming vibes that are completely unnecessary and out of sync with Singer’s more complex world-view.  Given the show’s long running time, a few of these tunes could easily be cut—especially toward the end, where the cast seems to break out into song at the drop of a hat.  Sometimes a composer is used best when her interventions are whittled down to their essentials, and luckily Sobule’s interventions can be quite effective.

For those who (like me) are not that familiar with the culture, the program for Yentl provides you with a Glossary of terms; be sure to peruse this before the show starts, the dialogue will be that much richer to your ear if you do.  And when—not if, but when—you go to see Yentl be sure to take a moment out to read the display in the lobby about Isaac Bashevis Singer’s sister—an author in her own right and the likely inspiration for Yentl.  You can also learn about the first woman to become a rabbi—years before American congregations began the practice.  For us, and for our times, Yentl can be an inspiring story of women conquering adversity and finding the careers of their choice—men strictly optional.

Advisory:  Yentl features mature subject matter and brief episodes of nudity (discreetly staged) which might not be appropriate for younger children.