Theatre Review: ‘9 to 5 The Musical’ at Walnut Street Theatre in Philadelphia PA 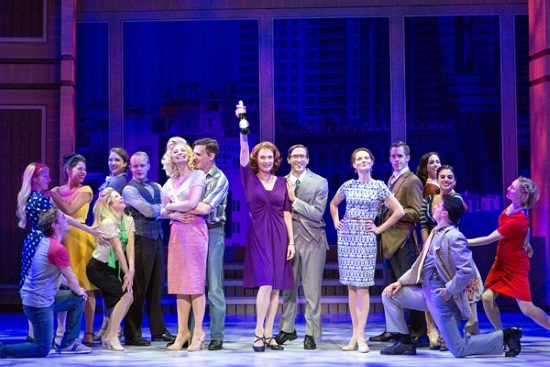 The cast of 9 to 5 The Musical. Photo by Mark Garvin.

Taking a hit movie and turning it into a property for the stage is always a risky proposition. Sometimes it comes off successfully and other times it fails miserably. When it does fail, it’s because the production team usually throws the movie up on stage without doing anything to make it theatrical. This however is not the case of the opener for the 206th season of Walnut Street Theatre in Philadelphia PA.

9 to 5 was a smash hit movie in 1980 with a powerhouse cast that included Lily Tomlin, Jane Fonda, Dolly Parton and Dabney Coleman. The title song with its driving beat and lyrics personifying the daily grind won Parton two Grammys and an Oscar nomination. In 2009 the movie became a Broadway musical with Parton writing a full original score which included the title song.

With a high-end cast, Parton’s score and a top flight production, here is one show that proves going from screen to stage can work.

Even though this movie landed 34 years ago, Patricia Resnick’s book is still very much relevant. Meet Violet Newstead, (Dee Hoty) a secretary at Consolidated Industries and a single mom to her son Josh (Ben Liebert) just trying to make ends meet. She has been stuck in the same job for many years and has just been passed over for a big promotion by the big boss Frankiln J. Hart (Paul Schoeffler). He has given the position to someone Violet trained. Hart has a secretary named Roz Keith (Mary Martello) who while being a by the books authoritarian, we realize she is really sweet on Hart. Then we have Doralee Rhodes (Amy Bodnar) a very attractive and busty blonde secretary from the south. She has been accused of having an illicit affair with the boss who is married but wants people to know that she is not some dumb blonde. The last of our trio is Judy Bernly (Amanda Rose) who has no experience as a secretary but needs the job after being in a bad relationship with Dick (Fran Prisco).

After being treated unfairly the girls decide to take matters into their own hands by kidnapping Hart and keeping him hostage in his own home. It’s amazing how useful a garage door opener can be. They then hope to get enough info on Hart to blackmail him and with the help of the company accountant Joe (Ben Dibble) they find things like money laundering embezzlement and other dishonest things that Hart has committed against his own company. While this is going on the girls turn the office into a much better work environment than it was before. How will it turn out? Rent the movie on Netflix or see the show for the answer.

This show requires that you have three strong lead females and this production certainly has that. As Violet Broadway veteran Dee Hoty commands the stage with a powerful presence and voice. All of her musical abilities are used to full potential in her act two showstopper called “One of the Boys.” As Judy, Amanda Rose has a complete transformation from a shy girl to someone with lots of backbone. Rose gets to perform the show’s eleven o’clock song called “Get Out and Stay Out,” which gives her a well deserved star turn. Amy Bodnar as Doralee might have the roughest job in the show because everyone remembers Dolly Parton from the movie in this role. Bodnar does not do an imitation of Parton, far from it. She plays the role honestly and delivers vocally with her solo called “Backwoods Barbie.” As the lecherous boss Franklin Hart Jr., Paul Schoeffler is appropriately sleazy while having remarkable musical abilities in numbers like “Here for You.”

Director Bruce Lumpkin and choreographer Michelle Gaudette give the show a huge jolt of energy in the musical numbers while making sure the story is front and center. The title song starts us off and it’s a wonderful ride from there.

Dolly Parton shows herself as a formidable composer for the stage. Numbers like “Around Here” move the story along very nicely as does the act one closer called “Shine Like the Sun.”

Production elements are top-notch as well. Robert Andrew Kovach’s sets depict many locales in the office as well as Hart’s house while Paul Black’s lighting creates the appropriate moods for each scene.

9 to 5 The Musical at Walnut Street Theatre is well worth the trip to Philadelphia this fall. With a high-end cast, Parton’s score and a top flight production, here is one show that proves going from screen to stage can work. Send your boss to Bolivia and enjoy.

Running Time: Two hours and twenty minutes with one intermission.

Advisory: Adult themes and advances made throughout.

9 to 5 The Musical runs through October 19, 2014 at the Walnut Street Theatre, which is located at 825 Walnut Street in Philadelphia PA. For tickets, click here.