Theatre Review: ‘A Raisin in the Sun’ presented by Compass Rose Theater 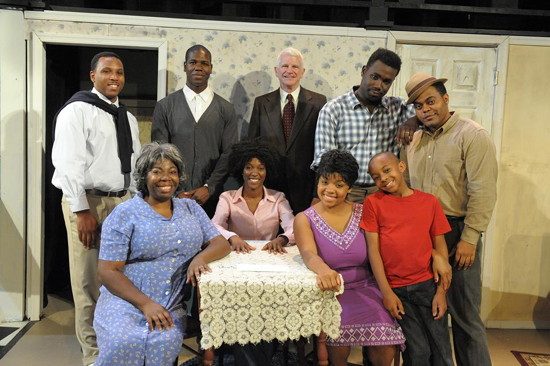 The cast of ‘Raisin in the Sun.’ Photo provided by Compass Rose Theater.

A Raisin in the Sun by Lorraine Hansberry debuted in 1959 on Broadway, but from the perspective of someone living in 2014 the basic plot is still very relatable. It is based on a black family’s experiences living in a subdivision of Chicago’s Woodlawn neighborhood, but Hansberry’s play could easily be adapted to any suburbia neighborhood from Boston to San Antonio, from Baltimore to San Diego.

Producer Lucinda Merry-Browne and director Lottie Porch are currently presenting A Raisin in the Sun at Compass Rose Theater in Annapolis, MD and, as always, tears flowed before leaving the theatre. Porch also contributed to the set decoration which depicts a tattered old apartment in Chicago’s South Side. Comprised of a kitchen, dining area and a living room, the furniture is reminiscent of the late 1940s / 1950s era. The print wall paper is peeling and the living room needs a fresh coat of paint.

The play’s focus is on the Younger family that includes Walter and Ruth Younger, their son Travis, Walter’s mother Lena (Mama) and sister Beneatha. Like many American families over time and across generations, the Youngers dream the American dream – the opportunity for prosperity and success, and an upward social mobility achieved by hard work.

Kahill Daniel plays Walter Younger who barely makes a reasonable living as a limousine driver. He dreams of investing in a liquor store with his pals Bobo and Willy Harris (character not seen). As the show opens, the family is eagerly awaiting for the insurance check his mother is about to inherit from his father’s passing. Daniel demonstrates a level of intense anger as Walt struggles with being so close to realizing his dream. He wants more out of life and better for his family, showing that his intensions are good, but his actions are not.

Anyone who aspires and wants to be inspired to dream their dreams should see this production.

Krenee Tolson plays Walt’s wife, Ruth Younger, as a ruminating character, quietly pondering the “what ifs” while still trying to be a good wife and mother. Though she is not content with their lot in life, she doesn’t complain. She is more concerned about the strife in her marriage and being the peace-keeper in the family. She is constantly dealing with the dynamics of their entire family that includes her over-the-top dreamer husband, an aging mother-in-law, and a sister-in-law who seems to have it all. The weariness of this character shows on Tolson’s face and in her body language especially when Ruth falls faint. Fighting or loving on each other, Tolson and Daniel bring their character’s passion to a level that could resonate with any American family facing the same struggles.

Nikole Williams is a dynamo in the role of Beneatha Younger aka Bennie. This character goes full-circle from being an educated black woman to questioning where she fits in as an educated black woman. Additionally, her opinion on various social topics has driven a wedge between her and Walt as well as their mother. But it is obvious Williams loves portraying this marvelous woman. She plays Bennie with such enjoyment, whether it is arguing with Mama or dancing an African dance – in African garb – with her brother, or prepping for a date with her boyfriend, George. Bennie is one determined woman, working toward medical school to become a doctor in era that women – let alone a black woman – were rare. Despite the strife she faces, Williams is very resolute with this character.

Theresa Cunningham is a force to be reckoned with as Lena Younger aka “Mama,” who is the matriarch of the Younger family. She is a holy woman with an abundance of motherly love and discipline to offer to her children and grandchild, Travis. Like any parent, she wants the next generation to lead a better life, including being happy. So Mama dreams of a two-story house with a backyard and a garden. Cunningham is powerful as Mama, striking a balance between stepping back and stepping in. She had two very intense scenes, one with Bennie and the other with Walt that brought on the tears. Still, Mama forgives her children’s the error of their ways and endures in her role as head of household.

Noah Hughes is just adorable as Travis Younger, Walter and Ruth’s son. He behaves as any kid his age, full of energy, wanting to play, and needing dad’s attention. Hughes is a natural and the chemistry between him and Cunningham is sweet.

Clayton Pelham, Jr. takes on the wealthy African-American roles of George Murchison. He is courting Beneatha but he is far too pretentious for her. As she tries to discover who she is, he tries to mold Beneatha into something she could never be – submissive. Pelham is good at making George unlikable, whereas Paul Cottman plays Nigerian student Joseph Asagai, who is just a class act. Cottman unveils a confident man who is certain of who he is and who he wants, and that happens to be Bennie.

Mr. Karl Lindner portrayed by Jim Osteen has a Ted Danson quality about him. He represents the Clybourne Park Improvement Association but realistically this character represents white America and it’s ideologies of the late 1950s. Osteen plays the stereotypical white male whose head is filled with misconceptions of the Youngers race. Osteen depicts Mr. Linder as a nice guy with a nice offer for the Youngers but he is also on the jumpy side when he is called back to the Younger’s apartment.

Niko Tarlay is Walt’s friend Bobo who comes across a maybe being mentally challenged. He certainly is quite jittery when he has to confess to Walt about Willy and their investment. Bobo’s confession certainly presents a turning point for the Younger’s and their future.

Costume Designer Julie Bays has Mama and Ruth wearing house coats and sundresses whereas Bennie wears jeans, a tailored shirt and loafers but then dons a festive African outfit that includes a wrap headdress. Walt, Travis and Bobo, for the most part wear trousers and long sleeve tailor-hemmed shirts. George is very stylish in his trousers, shirt and sweater tied around his shoulders. Joseph’s outfits show his level of sophistication and Mr. Linder wears a suit that goes back to the 1950s television show Father Knows Best.

A Raisin in the Sun is a story that represents the American family of any race, ethnicity, and social class. We all want that little bit of the American dream to have a nice home, make a decent living, and to be surrounded by loving friends and family. Anyone who aspires and wants to be inspired to dream their dreams should see this production. It is full of hope and triumphant but most of all it’s the message in the last line that Travis sings, “I don’t believe He brought me this far to leave me.”