Theatre Review: ‘Annie Get Your Gun’ at Way Off Broadway Dinner Theatre 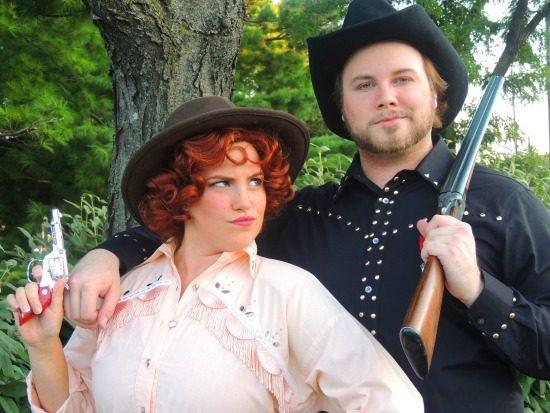 Ah…the age old question, when it comes to romance – what takes precedence – career or love? And who makes the sacrifice? That is the premise for Way Off Broadway Dinner Theatre’s current production of Annie Get Your Gun. The original music and lyrics by Irving Berlin and original book by Herbert and Dorothy Fields. This production of Annie Get Your Gun is directed by Bill Kiska, choreographed by Dee Buchanan, with musical direction by Jordan Stocksdale.

“There’s No Business Like Show Business,” is the opener presented by lead character Frank Butler and company. The ensemble sings and dances in a ho-down like manner to a truly timeless classic. This upbeat number sets the tone for the rest of the show that is full of frolic and fancy.

Jamie Lee Kiska plays rags-to-riches, brazen to beauty, Annie Oakley who is the best shot around. She is not the prettiest gal with her gruff mannerisms and lack of education but Kiska brings out the worst and the best in the Annie Oakley character. When she meets Frank Butler for the first time, all it takes is one look and Annie is smitten as a kitten and contemplates making some changes.

Jordon Stocksdale takes on the role of Frank Butler and as always is a heart-throb as the male lead. His character is confident, cocky, and slowly but surely losing his heart to Annie. On stage, Kiska and Stocksdale are infused with chemistry in both their romantic and fight scenes. Their initial shootout contest is fraught with competitiveness yet laced with passion. They share a mutual adoration for each other throughout the show, starting with a charming yet quirky duet, “The Girl That I Marry.” Annie continues with an amusing solo, “You Can’t Get a Man with a Gun.”

The cast gives a truly high-spirited performance and Annie and Frank are a fun and feisty couple to watch.

Ariel Messeca plays Colonel William F. Cody, aka Buffalo Bill, and what a goofy character he is. His costuming is snazzy but he could use a good barber. That aside, he is the one who discovers Annie and persuades her to join his Wild West Show. As Annie’s popularity increases, so does Frank Butler’s jealousy.

Annie eventually gets her man and without a gun. She and Frank call a truce and agree to equal billing. “They Say It’s Wonderful,” is a beautiful duet that has Annie and Frank in each other’s arms and Kiska and Stocksdale singing with stars in their eyes.

Trey T. Kiska is Charlie Davenport, the mid-aged manager of the Wild West Show who sets the scene for the show-within-a-show. He is a bit hyperactive but a highly motivated character. Charlie is the thinker among management, offering reason to complicated situations just like the Foster Wilson character played by Samn Huffer. Foster Wilson is a governing force throughout the show. An elder character, Huffer brings strength to this character, proving he is not someone to mess with. Huffer also doubles as Pawnee Bill, who was once Buffalo Bill’s former partner and now his rival.

Tori Weaver plays Dolly Tate who is Frank Butler’s assistant. Dolly is a bawdy character who is madly in love with Frank. However, her over-the-top ambitious mean-spirited style keeps Frank at bay. Additionally, she wants everyone around her to be as miserable as she, which makes her a far from likable woman. To top it off, she bullies her 17 year-old sister Winnie Tate portrayed by Mallory Rome.

Rome is beautiful and vibrant in this role. Winnie is also very much in love with half-breed Tommy Keeler played by Thomas Stratton. This character has a knack for knife-throwing and hits the right notes in his duets with Winnie in, “I’ll Share It All With You” (& company) and “Who Do You Love, I Hope.” The latter number reunites Tommy and Winnie’s after Dolly had their marriage annulled.

Annie’s younger sibling, Jessie is played by Matthew Ciazza and it shows that he loves to act. His character shows support for his older sister’s quick-draw, gun-slinging ways. Ciazza also demonstrates that Jessie is protective, keeping an eye on Nellie and Little Jake.

Nellie is played by Katherine Ford is so precious and precocious for her age. She has good family chemistry with Annie and her other two siblings. If Ford is planning on a theatre career, she’s off to a wonderful start.

Keller Knight takes on the role of Little Jake, who is so adorable. He has a bit of sass when he is flushing out game for Annie to shoot. Annie has a heart of gold when it comes to these youngsters and they hold their own on stage with this talented cast. Annie, the kids and Cowboy Trio perform a lovely heart-felt number, “Moonshine Lullaby.”

Bradford Love is Sitting Bull and leader of the Sioux Nation, who takes to Annie and adopts her as his daughter. When the Wild West Show returns to New York City, Sitting Bull decides to invest in the bankrupt show but also to be closer to Annie. Sitting Bull is unique with his keen insight he shares with his many one-liners.

The ballroom scene has Kiska and the cast performing, “I Got Sun In The Morning,” in their finest lace gowns and fancy tuxedos. It is a toe-tapping ditty that has Annie showing off her marksmanship by donning her numerous medals on her stunning shiny blue ball gown. This also has Frank sharing his three medals he won while Annie toured Europe without him.

One of the most notable numbers that has been used commercially throughout time is Annie and Frank’s duet, “Anything You Can Do,” has these two at it again, always trying to outdo one another. In their final shoot-out, ego against ego, Annie has a come-to-realize moment, with the help of Sitting Bull that she can’t get a man with a gun. In a draw, Annie and Frank reconcile, get married, merge the shows and live hopefully and happily ever after.

The ensemble company is composed of the magnificent talents of: Sarah Biggs, Mary Ellen Cameron, Ariel Hanke, Melissa Ann Martin, Matthew Mastromatteo, Charlie Cizek, Daniel Hafer and Sam Buchanan. Their numbers include “Entr’acte,” “I Got the Sun in the Morning,” “They Say It’s Wonderful” and “Finale Ultimo.”

Bill Kiska and Jordon Stocksdale design a set that is composed of varying platforms, entries draped in shiny gold, and red and white tenting that is accentuated with scalloped awnings. Settings include The Big Top, outside Wilson’s hotel, a Pullman car, a Cattle boat and a ballroom in New York City. The costuming is as bright and cheery as the set. In the beginning, Annie looks like a bum in her oversized shirt, trousers and coat. But as the show progresses, so does her costuming from her elegant pin-striped dress to decorative show wear. Frank is always dressed nicely from head to toe, cowboy hat to boots and in between his fringed shirts, jeans, and chaps match perfectly. The ensemble represents cowboys and cowgirls in outfits of black and red or shades of brown to with the guys in blues and tans with ample fringe, cowboy hats, and boots for all.

The upbeat tempo of Annie Get Your Gun will have audiences wanting to shout out, “Yee-haw!” The cast gives a truly high-spirited performance and Annie and Frank are a fun and feisty couple to watch.