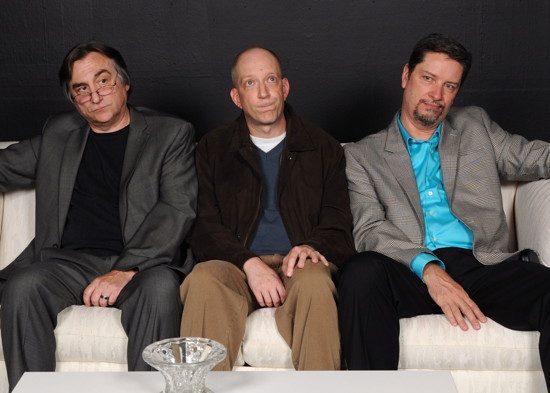 Vagabond Players analyze the friendship among three men in Art, the opening show of their 99th Season. Directed by Howard Berkowitz and written in French by Yasmina Reza with the translation by Christopher Hampton, Art uses an ambiguous, white painting as the impetus for dissecting the role played by each man in their friendship with each other; all wrapped up in a very humorous package.

…Vagabond does it so well, with such amusement and skill, that the white-on-white painting is worth the $200,000 price tag.

The show begins with the back of a large, stretched canvas facing the audience and two best friends, Serge (played by Steven Shriner) and Marc (Mark Scharf). Serge is brimming with happiness and satisfaction as he gazes on his new purchase, and Marc is gaping at Serge’s new painting with barely concealed disgust and puzzlement.

We soon learn through individual, spotlighted vignettes that Marc is flabbergasted that Serge spent about $200,000 on this painting which, to Marc, consists of nothing but a white background with white vertical stripes. Serge then tells the audience that Marc has started to change, and because of his recent close-mindedness Serge is no longer sure if he can keep Marc as his best friend. They both decided to ask their other friend Yvan (Eric C. Stein) his opinion about the painting, and that is when they begin to deconstruct each person’s personality and their relationships with each other.

Eric C. Stein as Yvan does a marvelous job playing a timid man about to be married to a woman who bullies him. In the beginning, Stein plays Yvan as a happy, somewhat dimwitted man, but as his relationships crumble through insensitive comments from his friends, it is a joy watching Stein develop Yvan into a strong and thoughtful, caring man.

In the beginning, Steven Shriner plays Serge as strong and decisive, but as Marc and Serge battle about the painting, Shriner skillfully reveals Serge’s insecurities. Mark Scharf as Marc is great as the antagonist and excels at portraying Marc’s range of emotions. Right from the outset his dislike of the painting is played with such intensity, but then we watch him calming down when the real reason behind the dislike is exposed.

In this interesting triangle of friendship, many intense issues are discussed and realized about relationships, who we are and where we all fit into the world, and Vagabond does it so well, with such amusement and skill, that the white-on-white painting is worth the $200,000 price tag.