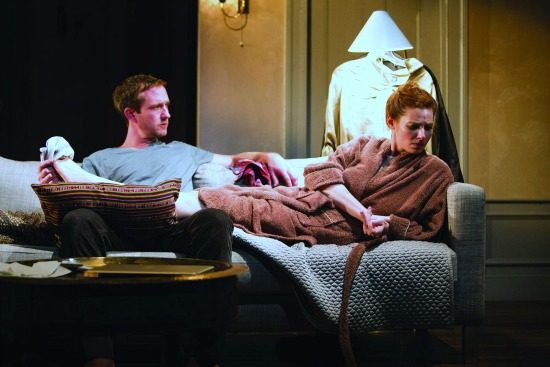 When a young woman named Abby returns home unexpectedly one afternoon after nobody showed for her yoga class, she finds her husband Zack home even more unexpectedly. That he was in the bedroom with the laptop and she came in at an inopportune time might have set the tone for any number of the more crass cable sitcoms these days.

But in Amy Herzog’s brutal play Belleville, which just opened in a sharp production at the Studio Theatre, that’s the very least of their problems.

Herzog has gained attention and some Pulitzer nominations in recent years for such plays as 4000 Miles, produced at Studio last year, and After the Revolution, two contemporary plays that tied current generations to past ones. There’s no grandparents in “Belleville,” though Abby keeps calling her dad from their apartment in the trendy Paris neighborhood. Instead, the action is laser focused on the young couple.

“Gillian Williams … gives about as brave a performance as you ever might see.”

She begins irritated with him; he tries to defend himself and eventually details emerge about what they know and don’t know about each other.

They seem to have an enviable life by any outward measure: a spiffy apartment in the City of Light, he’s got a job researching pediatric AIDS for Doctors Without Borders; she’s teaching yoga and learning French and putting her acting career on hold. They’re good looking and smart.

But then there’s that afternoon lapse and she hadn’t been taking her meds and — let’s stop right now for this message from Studio: “We feel very strongly that, among the many pleasures of Belleville, is the slow unraveling and revealing details of these characters’ lives. We would respectfully ask that you allow your readers those same pleasures and not reveal any major plot details in your reviews.”

I do think it’s fair to say to those who might be paying good money for the tickets to Belleville, a play they might think is nuanced consideration about how much we know about our closest relationships, that it is eventually a straight up thriller.

Herzog told somebody she studied the classic old movies “Gaslight” and “Suspicion” as she was writing it.

And just as my greatest memory of the Audrey Hepburn classic “Wait Until Dark” was the reaction of people in the movie theater (somebody’s hat literally flew off), my greatest memory of “Belleville” may be the young woman seated in front of me; a reviewer, like me; who threw down her program and pen, looked to to the exit, looked to her friend, had every indication on her panicked face that she would bolt before it was over because she couldn’t possibly look at what might be about to happen on stage.

Not that I’m going to reveal any plot details about why.

Nevertheless, let me tell you about other aspects of this strong production.

Gillian Williams, who was part of Fiasco Theatre’s Cymbeline not so long ago, gives about as brave a performance as you ever might see. She brings a magnetic, sympathetic air to her character despite her many admitted shortcomings; she throws her limbs around the stage like a dancer (she has a few bruises on her legs and is likely to get quite a few more as the production continues). And she is absolutely willing to completely strip down emotionally as she is physically.

Jacob H. Knoll as her husband Zack at first seems stiff by comparison, and yet this makes his own breakdowns later in the play more compelling and raw.

As if to place them in further relief, there is another more solid couple is in the cast — Maduka Steady and Joy Jones as a landlord (who is also a friend of Zack’s) and his more stoic wife. Both are very good.

While Debra Booth’s set, with seemingly working kitchen, bathroom and bedroom off the wide living room, is not quite the bohemian pad described in other productions, it’s sleek and solid in its skylights, so much so that it’s also kind of claustrophobic — for the audience as well as the couple at hand; we all know that no action will take place anywhere else (darn, and I so wanted to see Paree!).

Herzog’s biggest achievement in Belleville may be in working in the chimes and lights and sound effects of the crush of modern phones, computers and baby monitors into the action of the play — and sound designer Ryan Rumery handles it all very well. It really does sound like the shower is running a couple of times. Likewise, lighting designer Peter West lets the bright yellow French sunrises blaze into the room as needed.

One other bit of theatrics that seems surprisingly convincing is when they light up Zack’s little pipe. Is there a theatrical substitute that smells this realistic? (Less realistic: That Zack is some sort of on-the-edge pot addict, a la “Reefer Madness”).

Studio artistic head David Muse’s achievement as director is to keep the dialog sounding naturalistic and keep everything moving — even in a play without intermission.

There’s no doubt that word will soon get out about the play Belleville. I just don’t know what people are going to be saying about it. Or if they will legally be able to relate the plot details, even to themselves. Or if that woman in front of me will ever be able to look at another stage again.

Advisory: Adult situations and language. A sign outside the theater warns of smoking and nudity.