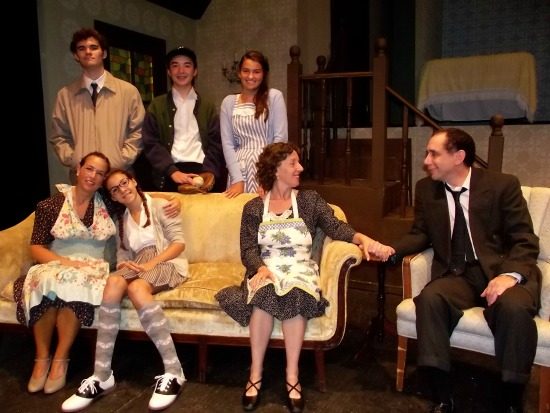 Brighton Beach Memoirs is a semi-autobiographical play by Neil Simon, set in Brooklyn, New York, September 1937 and is in current production at the Prince George’s Little Theatre. Director Ken Kienas brings an uproarious rendition of this coming-of-age comedy, focusing on 15 year-old Eugene Jerome and his blended family. Money is tight, dad is overworked, mom is tough, and his brother feels trapped. Add in an aunt with no confidence, a beautiful cousin that does, and a know-it-all younger cousin and this play a humorous look at the dynamics of family relationships.

Casey Baum plays Eugene and narrator of his own story. In doing so, he breaks the fourth wall that sometimes can be considered risky but in this case it works and Baum is marvelous. Eugene covers the trials of his family as if he is a reporter – dreaming of being a writer – while the Jerome’s fight hard times and each other, trying to survive the Depression. Life for Eugene is routine and it is his creative imagination that has him commentating on a variety of sports plays and girl stories. Baum is exceptional with his quick-witted sarcasm that easily invites the audience into the story. By far his best line, delivered with exuberance, “Guess who’s going to get blamed for the war in Europe?” bounces off the stage that makes the audience roar with laughter.

Steve Feder plays Jack (Dad), who is overworked and yet still manages to be head of a two-family household. Feder is very convincing through physical gestures and mannerism that Jack is worn-out yet he is still attentive to his family’s needs. He worries about supporting the family but is very smart, sensitive, and understanding man. Feder shares some special moments on stage with Sophia Speciale who plays Nora and with Mike Culhone as Stanley.

Nora Zanger is Kate (Mom) who is a strong woman but constantly nags Eugene, even if he hasn’t done anything wrong. She attempts to hold the family together by solving their problems which causes her to be quite opinionated and Zanger is quick with snappy one-liners. However, it seems Kate’s way of being a loving mother is a little too harsh at times.

Brighton Beach Memoirs is a timeless classic about family, family dynamics, and working through life’s challenges.

Mike Culhone as Stanley is supposed to be the got-it-together cool, older brother but he is pretty much an idiot. He teaches Eugene everything he knows about girls, sex, and then some in a very crass manner. He is disrespectful to his boss and to top it off, gambles his entire paycheck, just when the family needs it the most. But Stanley does what he does out of loyalty to his family and stuffs his need to want to get out of Brighton Bridge. In the end, he redeems himself, finding a way to make up for losing his paycheck. Culhone is comical in the way he educates Eugene about girls and sex, and yet has a very pensive moment that allows for Stanley’s transformation into a responsible adult.

Jill Goodrich plays Blanche as a Nervous-Nellie aunt, who constantly hovers over her youngest daughter, fights with her eldest, and is lost over the death of her husband. Goodrich’s character is insecure and doesn’t trust her own shadow. For a single mother of two, living with her sister during the Depression, Blanche worries about being a burden yet she blossoms with a series of arguments with Nora and Kate that erases her cowering character, eases the hurts of the past, and allows confidence in.

Annalie Ellis plays precocious Laurie who is so curt with her responses that one can’t help but love and laugh with her. She is very smart in so many ways – book smart, a smart-aleck, and very smart how she milks her fluttering heart condition. She basically does what she wants, when she wants, and has no issue voicing her opinion. She is a sassy character and Ellis is a joy to watch with a promising future.

Eugene believes he is in love with his cousin Nora, played by Sophia Speciale. Nora, like Eugene, is the dreamer of the family. Wanting to go dance on Broadway, she holds her ground against her family with the hope she will be able to pursue her dream. Additionally, Nora gives a good argument; she could make life better for her mother and sister with the money she could make, but the concern is her leaving school at 16. One of the most poignant moments of this production is her confrontation with her mother. Speciale is charged in this scene, revealing her character’s pain, passion, and the many misunderstandings over the years. In the end, Nora is willing to sacrifice her dream to have a better relationship with her mother.

Set Designer, Cynthia Bentley creates a traditional period home with furniture pieces from the 1930s. Two platforms represent the living room and dining room on the first level while the upper platform is the boy’s and girl’s bedrooms. There are two entries to the house via the livingroom and kitchen and a bench that represents the outside. The lay-out makes for good movement about the stage from the main floor to the upstairs. Lighting Designer, Garrett Hyde enhances the set and the action taking place in a particular room with brighter lighting as well as setting the mood or time of day with lower lighting.

Costume Designer, Malca Giblin also presents traditional time-period costuming with Kate and Blanche wearing printed dresses with clashing print aprons, and sensible pumps. They both wear their hair up. Jack wears a brown suit with a hat while Stanley fashions trousers, a shirt and tie, khaki jacket, and a patterned newsboy cap. Eugene wears knickers with socks and tennis shoes, a shirt and a letterman’s jacket along with his baseball cap. Laurie’s school uniform is traditional plaid with saddle shoes and wears her hair in braids while Nora’s dress was a baby-blue, pin-striped with a baby blue cardigan sweater.

Brighton Beach Memoirs is a timeless classic about family, family dynamics, and working through life’s challenges. It sends a message that family matters regardless of disagreements, mistakes or circumstances. This production is entertaining and a treat for the whole family.

Brighton Beach Memoirs runs through Saturday, September 13, 2014 – closing performance is a 2 p.m. matinée. All performances are at the Bowie Playhouse – White Marsh Park, Bowie, MD – allot a few extra minutes for parking and walking to the theatre. For tickets click here or by calling Prince George’s Little Theatre, Inc. Box Office at 301.937.PGLT (7458).